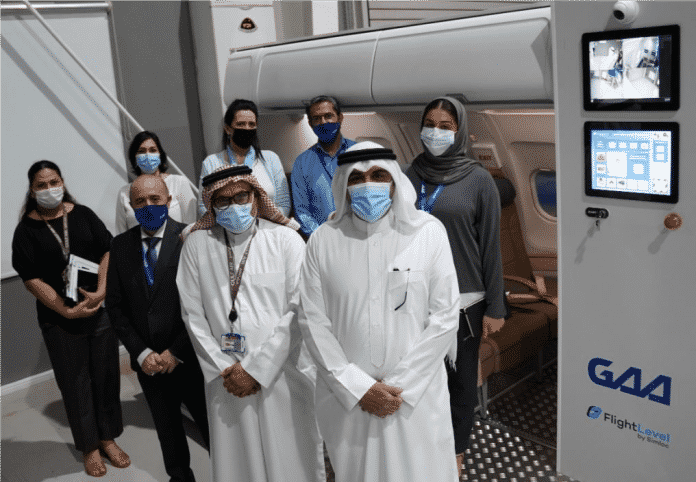 Gulf Aviation Academy (GAA) announces that it has installed an A321 NEO Over-Wing Exit (OWE) Door Training Device to serve the national carrier Gulf Air for its training requirements.  This will be used for both pilots and cabin crew as new A321 NEO aircrafts will be added to the fleet from 2020 and onwards.  This device is part of an expansion plan that the academy has embarked on as part of its strategy.

“This purchase underpins the cooperation between GAA and Gulf Air, further confirming the role of GAA as being the national Aviation Training Academy.  This device primarily has been sourced primarily to support Gulf Air’s training requirements.  I would like to thank the Gulf Air Group (GFG), GAA’s Board of Directors and H.E. Kamal Bin Ahmed, the Chairman of the Academy for his confidence and endorsement to GAA’s management to jointly invest in this device and also the team at Gulf Air.

The training that this device will enable is critical to the airline being able to meet its operative goals and also support with their fleet growth.  GAA is always seeking to play a supportive role to Bahrain’s national carrier, the aviation sector, and the training industry overall.”

“We at Gulf Air are very pleased with the recent addition of this important training device by GAA to support our upcoming A321neo aircraft additions and related training to our pilots and cabin crew.  These aircraft will strengthen Gulf Air’s network and position to serve high-demand, medium to long haul routes which is part of our plan of fleet renewal strategy.”

“This particular device could not arrive at a better time as there are about 400 pilots and 1,000 cabin crew that need to be trained on it in 2020 alone.  This device has been strategically positioned in Bahrain to support our national carrier but the academy will seek to increase interest for training on it from across the region and beyond.

One of our key clients in the Kingdom of Saudi Arabia also ordered in late 2019 10x aircrafts of the A321 NEO type that could see its crew training on it here in the Kingdom of Bahrain.  This will be in line with the academy’s goal of promoting the ‘Train in Bahrain’ theme to its client base.”