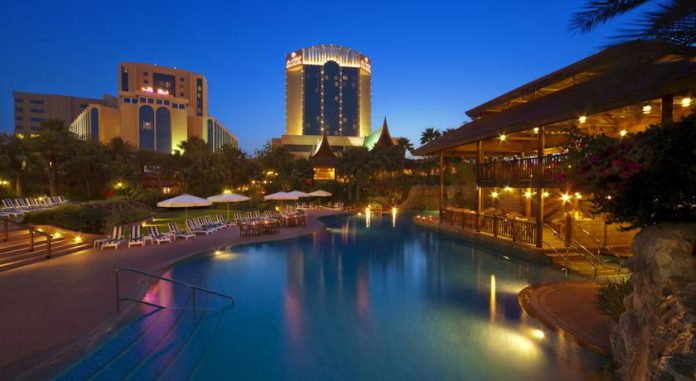 Gulf Hotels Group’s forty seventh Annual General Meeting was held on Monday March 13, 2017 at 12:00pm in Awal Ballroom 3 at The Gulf Hotel. The meeting was presided over by Gulf Hotels Group’s Chairman, Mr. Farouk Yousuf Almoayyed, and representatives from the Ministry of Commerce, Central Bank of Bahrain, Bahrain Bourse and Auditors Ernst and Young were also present.

For the year ended 31st December 2016 GHG achieved a total Gross Operating Revenue of BD 36.377 million compared to BD 32.370 Million in same period 2015, an increase of BD 4.007 Million or 12.38% and has generated a Net Profit of BD 16.133 million in comparison with BD 9.197 Million achieved in the same period 2015, an increase of BD 6.936 million or 75.41 % on 2015 mainly influenced by one time provisional bargain profit.
Adding to the above he commented that the hospitality industry has been negatively impacted by a number of factors including the government’s decision to cap service charge to 10% and increase of Government levy by 5%, cuts in subsidies including meat products, fuel and utilities and the almost doubling of import duties on certain beverages. These factors, along with increased competition from a number of new hotel openings in 2016, have negatively impacted the income of the Gulf Hotel.
The austerity drive, which will continue with new measures in 2017, 2018 and 2019, will have further impact on the industry as the spending capability of people declines. Reduced economic growth will impact on the hospitality sector as will the introduction of VAT from 2018 onwards.
All the factors stated above has significantly reduced the profitability of the Hotel as a unit.

Based on the results and as recommended by the Board of Directors in their meeting of February 15 2017, Shareholders approved a cash dividend of 25% or 25 fils per share on the paid up capital and 10% bonus shares (one for every 10 shares), Director’s fees of BD 267,000, Charity Reserve Expense of BD 224,200 and BD 10,000 towards National Promotional activities.
Mr. Almoayyed also revealed the Group’s expansion strategy which includes expanding the existing hotel portfolio and establishing a number of stand-alone restaurants.
• He confirmed that the company has commenced the development of the 230 rooms, five star Gulf Hotel Business Bay in Dubai, a waterfront property located 1.5km from Burj Khalifa and Dubai Mall, and expected to be completed end 2019.
Mr. Almoayyed expressed his thanks and appreciation to retired Chief Executive Officer, Mr. Aqeel Raees, who led the company until the end of 2016 and the executive management for continuously upholding an excellent standard of service, while diversifying the Group’s activities.

Adding to sentiments of the Chairman, Chief Executive Officer Garfield Jones expressed his satisfaction with the results taking into consideration testing market conditions. He also added comments about the future projects viz:
• The Group’s plans to enter into the stand-alone restaurant market in both Bahrain and KSA, having already acquired Block 338 in Adliya Tourism Zone for developing it into a multi-unit restaurant and leisure facility, and pursuing Joint Venture proposals for opportunities in Saudi Arabia.

• The construction of 109 unit Gulf Executive Residence Juffair, which is well underway and expected to be completed by Q1 2018.

Mr. Jones concluded by expressing his appreciation towards the management and staff of all of the Group’s divisions whose hard work and efforts have contributed towards achieving these results in difficult times. He also stated that the success of any company comes down to its customer base, thanking the Groups valued customers for their continuous support.

Most of us, to achieve any goal are advised to have self-control and self-discipline. For instance stop eating carbs, ground yourself to study. These...
Read more
PR This Week

His Majesty King Hamad bin Isa Al Khalifa has been awarded the Legion of Merit, Degree Chief Commander by then US President, Donald J....
Inside Bahrain

His Majesty King Hamad bin Isa Al-Khalifa sent a cable of congratulations to the President of the United States of America Joe Biden on...
Inside Bahrain

Under Armour, has officially opened its very first brand house in the Kingdom of Bahrain. The new store is located in the premier shopping...
Sports This Week

Raed Raffii and Raed Himmo shared the spoils for the second successive week of racing in the 2020/2021 BIC 2,000cc Challenge, held over the...
Inside Bahrain

Most of us, to achieve any goal are advised to have self-control and self-discipline. For instance stop eating carbs, ground yourself to study. These...
PR This Week