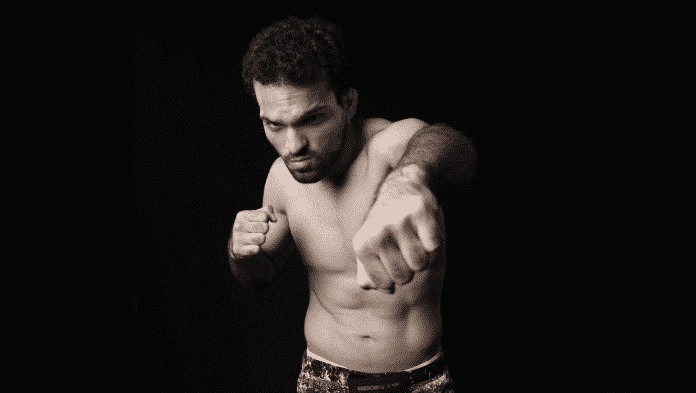 Hamza Kooheji, a pioneer and star for MMA in Bahrain

Aptly nicknamed “The Pride of Bahrain”, Hamza Kooheji has been one of the stalwarts of the Kingdom around the world since he first made his mixed martial arts debut. As he prepares for the biggest fight of his life, Kooheji will be representing Bahrain in the biggest stage, in front of his fans and family.

Hamza will take on Nahuel Gandolfi, from Argentina, in the co-main event of BRAVE CF 29, the Bahraini-born promotion’s biggest show of the year. The placing of his fight on the card shows how far he’s come. Initially, Kooheji started martial arts training to lose weight and have a more healthy life. However, he found more than that, as the fighting became his lifestyle.

Hamza has been trained by current BRAVE CF president Mohammed Shahid and his brother Yousif Kooheji. He caught the eye of His Highness Shaikh Khalid bin Hamad Al Khalifa while winning several bouts in the Middle East and taking the flag of Bahrain to the highest spots in the Gulf.

As BRAVE Combat Federation went from HH Shaikh Khalid’s dream to reality, signing Kooheji was a matter of time. He was in action in the first-ever BRAVE CF event, which took place in September of 2016, beating Mohamed Mashaly by submission.

With the help of Eldar Eldarov, Team Bahrain and KHK MMA head coach, Hamza became a well-rounded fighter and started to blossom into one of Bahrain’s heroes. He represented the Kingdom in Indonesia, Abu Dhabi, and Saudi Arabia, and will go back home for the most important bout of his life.

A win over Gandolfi will put him ever closer to a title shot in the Bantamweight division. However, the biggest win for Hamza is and always will be his contribution to putting Bahrain on the top of the mixed martial arts world.

You are one of the stalwarts in mixed martial arts. Can you detail the initial days? How and when you entered the world of martial arts?

I started training back in 2012, it was straight away when I finished high school. I loved the fighting game since I was a kid and I always wanted to join an MMA gym.

When did you first realize that you are a ‘Fighter’ and you are going to take it as your career?

As Arabs we are all fighters, it’s in our blood.

Can you mention the trainers and evolvement in training until today?

I started training with Mohammed Shahid in a small gym. My big brother had a big factor in motivating me and also training me as he was training for a long time. Then with the support of HH. Shaikh Khalid bin Hamad Al Khalifa and Eldar Eldarov, my fighting game went to another level.

The sport of Mixed Martial Arts was relatively unknown in the Kingdom of Bahrain during the time you started training. Have you faced any challenges due to the non-familiar martial arts?

At first, my family and friends didn’t know what to expect from this sport, if there is a career because there were no Bahraini fighters in MMA. They were convinced sooner.

Which is your most memorable bout so far?

All my three fights in Bahrain are memorable as I got to fight in my own country with my own people supporting me.

You are preparing for the biggest fight of your life to take on take on Nahuel Gandolfi, from Argentina, in the co-main event of BRAVE CF 29. What are the additional preparations you are taking for this?

I take every fight as it is the most important fight of my career. I learn new things with every fight camp and get more experience. I am different and a better fighter on every fight.

Who has supported you throughout your journey?

The support I get from Bahraini people is unbelievable, we always support each other in every sport and every situation

You have taken Bahrain on the top of the mixed martial arts world. What’s your dream after you win the Bantamweight title?

Sports teach you discipline, especially in MMA you learn to show respect. My dream after the Bantamweight title is to keep defending the belt for Bahrain and inspiring young Bahraini fighters to pursue an MMA career.

Bahrain’s own Isa Najem has raised the prestige of the Kingdom in the global music platform by winning the “Best Original Music Score” by...
Read more
Spotlight

Dedicated to Bahrain with Passion, Interview with Dr. Fatima Albalooshi

A passionate humanitarian, Dr. Fatima Albalooshi was named as the fourth most influential woman in government in the Middle East by Forbes in 2014....
Read more

In response to national COVID-19 mitigation efforts, Gulf Air, the national carrier of the Kingdom of Bahrain, has successfully imported 82 tons of medical...
Sports This Week