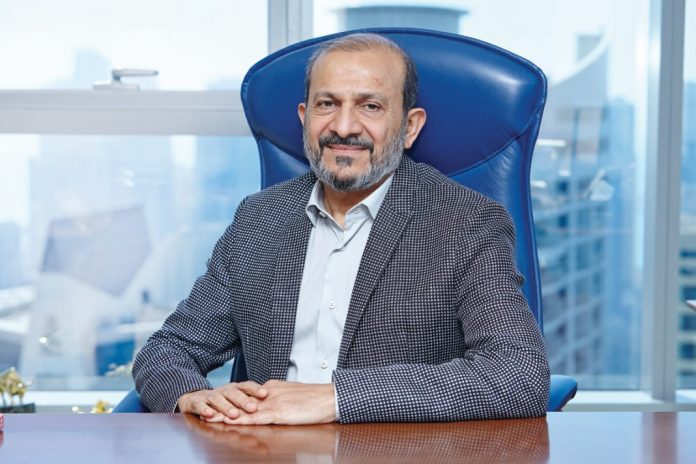 Firoz Merchant is the Founder and Chairman of Pure Gold Group, and has a story of a determined entrepreneur who never gave up on his dreams in spite of many hardships since youth. Join BTW as we explore his life and humanitarian initiatives.

Firoz Merchant grew up in a family of modest means in India. He was one of nine children in a family of six boys and three girls. His father Gulam Hussain, was a real estate broker and his mother Malekbai was a housewife. The family’s real estate business often did not do well and they led a hand-to- mouth existence.

When Firoz was 11 years old, he discontinued his education to support his father in the day-to- day running of the business. Gradually, learning from his father, he was able to grow the family business.

After his marriage, he decided to visit Dubai for honeymoon with his wife Rozina. In Dubai, he was mesmerized by the Gold Souk and he felt a connection to the country and the gold trade. After he left Dubai, he expressed his desire to his father to move to Dubai and try his hand at the gold business. Though initially hesitant, his father eventually gave him his blessings and thus began the next phase of Mr Merchant’s life.

Firoz Merchant arrived in Dubai in 1986 without much money in hand but nevertheless, a dream to make it big. Initially, he made his living as a gold broker for a minimal commission.

Slowly, he built up a trusted relationship with gold merchants, and after saving whatever money he could, he opened a bank account which enabled him to take on larger orders.

He took a strong leap of faith when he opened his own jewellery store Pure Gold Jewellers in 1989 in Dubai’s bustling Gold Souq.

Within two decades of establishing Pure Gold Jewellers, Firoz grew it to a multinational jewellery chain that is a benchmark for the jewellery industry in the UAE.

Pure Gold Jewellers currently boasts 125 modern retail outlets making it one of the fastest growing jewellery retail chains in the Middle East and India. The company also operates state-of-the art factories in India and China and provides employment to 3,500 people.

As the Chairman of the Group, Firoz Merchant drives the company’s plans to establish 300 jewellery stores by 2018.

“I believe hard work, ethics and a long-term vision are crucial to an entrepreneur’s success. Even when times were hard, I never gave up. I persevered and today, with Almighty Allah (SWT)’s blessings, we are a major player in the jewellery industry,” he says.

Today, Firoz Merchant is one of the most renowned business leaders in the Middle East and widely recognized for both his corporate and humanitarian initiatives.

The most unique humanitarian initiative he is committed to is ‘Forgotten Society’, which aims to help debt-laden prisoners in UAE jails. Starting in 2011, he has helped repatriate 5,500 insolvent prisoners so far spending USD 3 million (Dirhams 10 Millions) till date.

Under his leadership, Pure Gold Group has also contributed to relief work in many countries affected by natural calamities including India, Sri Lanka, Philippines, Indonesia, Myanmar, Maldives, Germany, and Levant countries. Firoz also worked with authorities in the UAE when amnesty was granted to Indian workers to return home.

He is now pledging an extremely generous BD120,000 to help secure the release of thousands of poor workers languishing behind bars and are unable to afford the payment of minor fines.

His philanthropic actions will provide freedom to thousands of poor workers who languish behind bars. He has pledged an annual sum of BD120,000, to obtain the release of those have minor fines but are unable to afford the payment. The aid will not be provided to anyone whose criminal offence is of a serious nature.

His comments came at a press conference to announce the initiative, “Each month BD10,000 will be allocated towards the purpose of paying of fines and securing the release of the prisoners.  In addition, help may also be provided to financially help the released individuals along with arrangement for air ticket to allow for travel to their respective home country,” Mr Firoz explained.

The philanthropist added that he had a meeting with Justice, Islamic Affairs and Endowments Minister Shaikh Khalid bin Ali Al Khalifa to discuss the release of prisoners serving sentences in Bahrain’s jails.