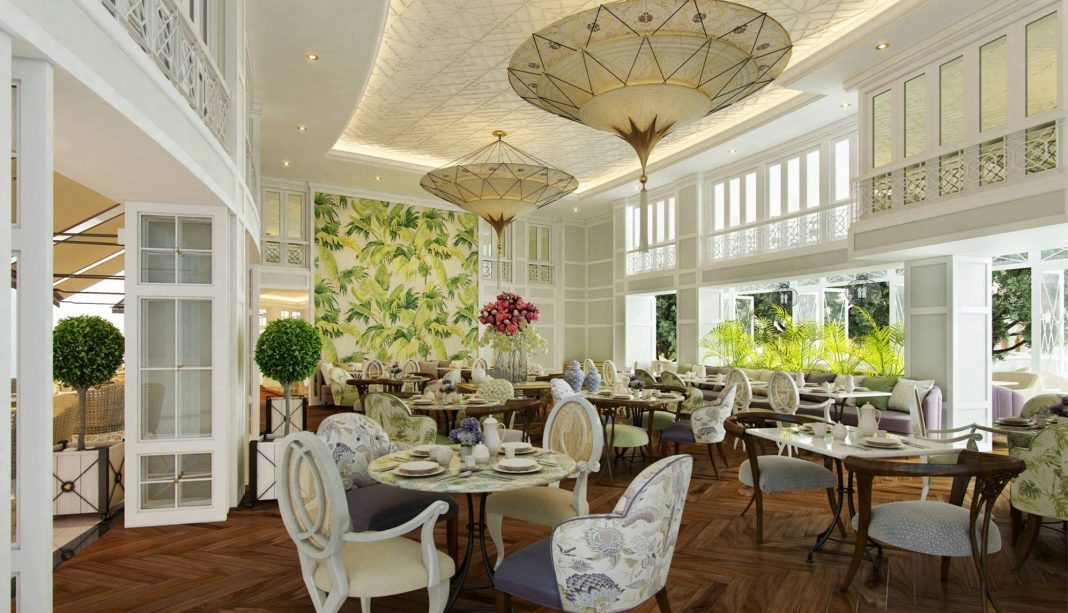 Hévéa Café, culinary experts in the Kingdom of Bahrain, proudly announces its association with the foremost expert in intricate furniture design, the globally renowned Christopher Guy.

Having only opened its doors to the public towards the very end of last year, Hévéa Café is now officially listed among Christopher Guy’s distinguished clientele, joining a very elite and highly exclusive club, instantly highlighting the magnificence of its décor, which in turn emphasizes on the high standards of atmospheric quality the Café offers in terms of general ambience. This quality, consequently, positively reflects on the calibre of the edible offerings in Hévéa Café, reflected by the personalized approach that goes into creating them and the expert hands that mould them.

Christopher Guy Harrison is a British luxury furniture designer who is a founder and head designer of the international furnishings brand Christopher Guy. Originally known for a wide range of decorative mirrors, the Christopher Guy brand grew into a collection of upholstery, chairs, dining tables, sofas, headboards and office furniture. His penchant for flair, an eye for the spectacular and a creative mind that borders on genius levels of innovativeness have catapulted Christopher to the very top of the global designer industry.

Christopher’s signature design includes the patented Chris-X leg design and his golden touch has won him a variety of awards including the Outstanding Design award, awarded to him by The British Interior Design Association in 2004. His illustrious career has also bestowed upon him distinguished titles such as the 2011 Design Icon by The World Market Center Las Vegas and Las Vegas Design Centre, with past Design Icon recipients including luminaries in the field such as Juan Montoya, Vicente Wolf, Roger Thomas, Vladimir Kagan and Larry Laslo.

Elatedly elaborating on being associated with such a talented and renowned designer, General Manager of Foods Unlimited, Chef Guy Gateau said: “Christopher Guy is a gifted individual, a leading light that embodies the natural talent in mankind’s finest. And his complete mastery of that talent and an all-encompassing passion that inspires a personalized touch which oozes through every aspect of his creations, have enabled him to enjoy a full and celebrated career that has seen him cater to the likes of heads of states, celebrities and other eminent persons. Therefore, it gives me utmost pleasure to announce that most of the furniture that one sees in Hévéa Café comes from Christopher Guy’s collection, with some being specially created to reflect the soothing and relaxing aura that free flows through our restaurant. It is indeed an honour to be in the company of such exclusive clients.”

“From the chandeliers which were custom-made in Venice, to the table tops that were custom-made in South East Asia, even to the flooring – everything here has a story to it; in fact every piece of furniture has been custom-made, adding an aesthetic element to Hévéa Café that distinguishes it from every other dining outlet in the culinary scene in the Kingdom of Bahrain. The affluence, grace and elegance that emanates from Christopher Guy’s furniture provides an overtone that perfectly complements the highest quality that is permeated within the succulent delights that are available at Hévéa Café. And we look forward to offering our customers, both regulars and first timers alike, these excellent attributes, in both our food and our ambient environment, and therefore a fun and relaxing time that will have them surely coming back for more such memorable experiences,” he added.

Some of Christopher Guy’s clientele includes Harrods and Harvey Nichols in London, the Bellagio and the Hilton, Las Vegas, the Trump Plaza, New York, the Mirage Hotel and the Atlantis Hotel in Dubai, the Sakhir Royal Airbase in Bahrain, the Princess Nora University in Riyadh, the Jeddah Hilton in Jeddah, and the Ritz-Carlton, the Hyatt and the Four Seasons, worldwide, among many other eminent establishments internationally. One can also see his creations in films such as 007 – Tomorrow Never Dies and Casino Royale, The Hangover, Ocean’s 13, Charlie’s Angels 2, the Mummy, Room 1408 and The Devil Wears Prada.

Hévéa Café is a one of a kind coffee shop that offers the Kingdom of Bahrain the opportunity to bask in a comprehensively relaxing ambience and indulge in cuisines that fuse together the best of the two continents, Europe and Asia. Situated in a vantage point on the ground floor of Al A’ali Shopping Complex that provides a breathtaking view of the Mall and the Seef Area, Hévéa Café boasts an interior that envelopes customers in a serene setting that offers comforts that rival the delights of home and scintillating tastes that reflect the experience and expertise of Chef Guy with every sumptuous bite.