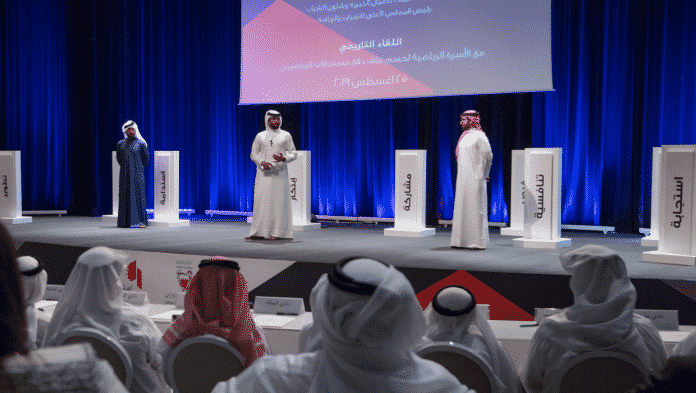 His Highness Shaikh Nasser bin Hamad Al Khalifa, Representative of His Majesty the King for Charity Works and Youth Affairs and President of the Supreme Council for Youth and Sports, affirmed that the Royal Directives of His Majesty King Hamad bin Isa Al Khalifa will surely enable Bahraini sports to compete in international arenas and steadily progress to higher levels among nations, asserting that HM the King is concerned about the Bahraini sports movement and constantly instructs to solve all the issues and challenges facing this important sector in a way that preserves rights and achieves justice among all. 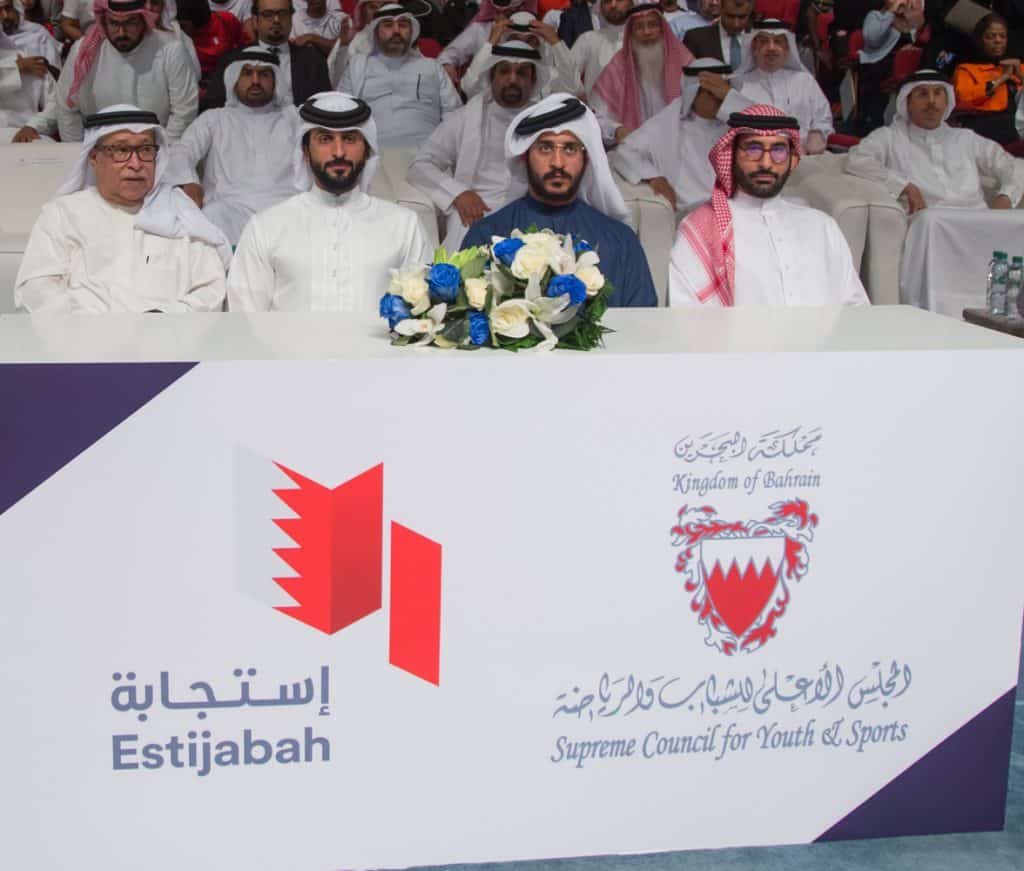 In the meeting, His Highness resolved the issue of the dues of athletes, administrators, technicians and coaches. HH Shaikh Nasser addressed the attendees and highlighted that the meeting comes to serve the directives of HM the King to continue developing the Bahraini sports sector. HH Shaikh Nasser noted in his speech to the numerous achievements attained by the Bahraini sports on different levels during the year 2018; the “Year of Gold”. His Highness confirmed that more achievements are anticipated this year by Bahraini athletes, under the new leadership of HH Shaikh Khalid of the Bahrain Olympic Committee.

HH Shaikh Nasser also underlined the significance of the open and competitive environment concept that was launched by His Royal Highness Prince Salman bin Hamad Al Khalifa, the Crown Prince, Deputy Supreme Commander and First Deputy Prime Minister, stressing that such concepts are the base of the National Youth and Sports Development Programme ‘Estijabah’ (Response).

His Highness highlighted some of the efforts dedicated to ensure the continuity of the development of the youth and sports sector in Bahrain, mentioning the good preparation of new generations, hosting local and international youth and sports events and activities in the Kingdom throughout the year, and granting the youth the opportunity to excel and be creative and innovative.

While addressing the attendees, HH Shaikh Nasser pointed out several matters that are among the national efforts to develop the youth and sports sector in Bahrain and to push it further. This included professionalism in sports and resolving the dues of athletes, administrators, technicians and coaches, as well as the debts of national clubs, restructuring sports institutions, talents creating, establishing companies that are affiliated with clubs and more.

In this regard, His Highness stated: “Today, our priorities include caring for players and working to provide them with the ideal environment to progress. We seek to ensure that they are provided with justice. So, we are gathered here today to resolve the dues of athletes, administrators, technicians and coaches, and ensure that their rights are handed over to them, so we could focus on other important matters and challenges, and rapidly resolve it. We are focused today on justice and the preservation of rights, as HM the King has always focused in all his speeches on the basis of establishing justice among all.”

HH Shaikh Nasser unveiled the mechanism of disbursing dues to players, explaining that players are required to register with the Ministry of Youth and Sports Affairs, which will verify the matter with each club, before depositing the amounts into the players’ accounts
through Bahrain Development Bank. 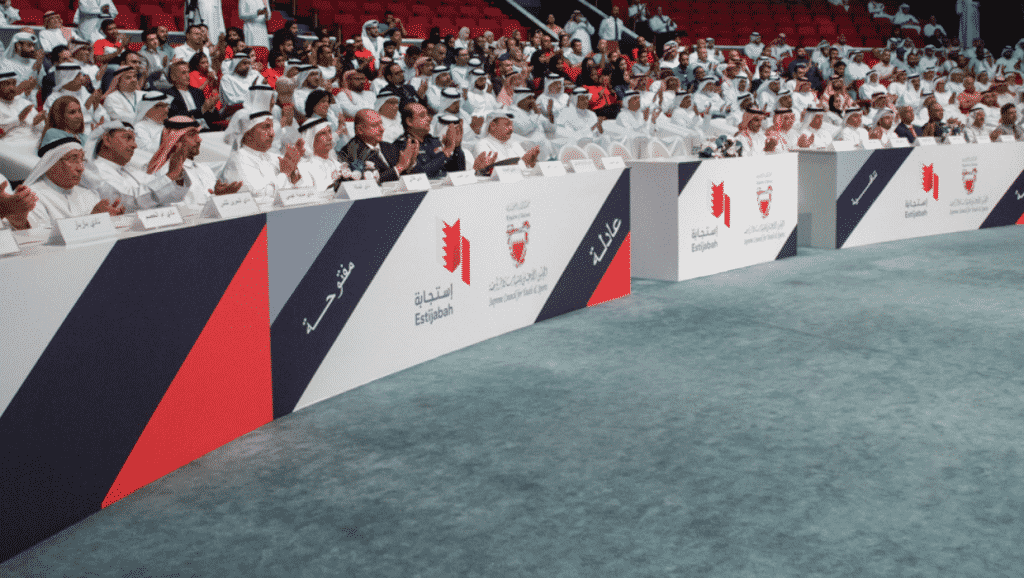 His Highness expressed thanks and appreciation to the cooperative parties in solving this matter, mentioning HE Shaikh Salman bin Khalifa Al Khalifa, Minister of Finance and National Economy, HE Mr. Aymen bin Tawfeeq Almoayed, Minister of Youth and Sports Affairs and the other parties that contributed to resolving this
matter.

During the assembly, the heads of the clubs signed agreements to ensure the disbursement of the dues of players, administrators, technicians and coaches. They thanked HH Shaikh Nasser for his remarkable efforts that are dedicated to the improvement of the youth and sports movement in the Kingdom of Bahrain and to remove all the obstacles facing it.

The World Health Organization (WHO) has expressed appreciation of the efforts of the government led by His Royal Highness the Prime Minister to reduce...
Read more
Inside Bahrain

The Supreme Council for Women (SCW) has today started field work as part of the “Together for Bahrain's Safety" which was launched recently. Basic commodities...
Read more
Inside Bahrain

The National Taskforce for Combating the Coronavirus (COVID-19) held a press conference highlighting updates on national efforts and strategies to prevent the spread of...
Read more
Inside Bahrain

In line with the directives of the Government’s Executive Committee, chaired by His Royal Highness Prince Salman bin Hamad Al Khalifa, the Crown Prince,...
Read more
Inside Bahrain

In line with ongoing efforts to prevent the spread of the Coronavirus (COVID-19), the Ministry of Health today announced it has started conducting field...
Read more
Inside Bahrain

The World Health Organization (WHO) has expressed appreciation of the efforts of the government led by His Royal Highness the Prime Minister to reduce...
Sports This Week

Fitbit’s upcoming Charge 4 fitness tracker broke cover earlier in March. Revealing a design that was virtually identical to the 2018 Charge 3 model....
Inside Bahrain

In line with ongoing efforts to prevent the spread of the Coronavirus (COVID-19), the Ministry of Health today announced it has started conducting field...
Sports This Week

If you’re looking to renew your ID card or need other services related to it, remember that there’s no need to invest time and...
iGA

With the current situation at hand & in line with its commitment to protect its employees and the public, the Information & eGovernment Authority...
Inside Bahrain

Huawei offers users an extended warranty on a range of products. This as a precautionary measure based on recent public health and prevention considerations....
Entrepreneurial Journey

Many years ago I unfortunately had the habit of smoking. Actually I was not a chain smoker, but would enjoy five or six cigarettes...
PR This Week

The Information & eGovernment Authority (iGA), in collaboration with the National Taskforce for Combating the Coronavirus (COVID-19), has launched the “BeAware Bahrain” application. The...
© GO ALIVE MEDIA
MORE STORIES