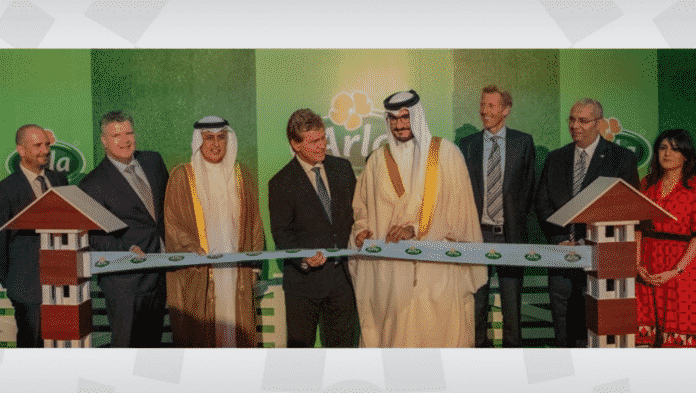 During the opening ceremony, HH Shaikh Isa bin Salman highlighted that the Kingdom’s competitive business environment has bolstered its position as a business and investment destination within the region. His Highness added that the promotion of sustainable development and opportunities for citizens by “Team Bahrain” has led to the Kingdom being identified by the World Bank as one of the top 10 most improved countries in the Doing Business 2020 report.

HH Shaikh Isa noted that the Kingdom’s sophisticated business infrastructure, particularly the facilities provided by the Salman Industrial City, continues to play a vital role in further strengthening the logistics sector, advancing the Kingdom’s investment-driven economic development in line with the principles of Bahrain’s Economic Vision 2030.

In a speech given by the Minister of Industry, Commerce and Tourism, HE Mr. Zayed Rashid Al Zayani, said, “We are delighted to welcome Arla as part of Bahrain’s manufacturing landscape.  As a vital member of ‘Team Bahrain’, the Ministry of Industry, Commerce & Tourism shall continue to play its role in attracting FDI, facilitating business and supporting growth in line with our economic diversification and expansion plans.”

For his part, Arla Foods CEO Peder Tuborgh said, “The Middle East and North Africa (MENA) is a priority market for us and the inauguration of this production site in the Kingdom of Bahrain consolidates our commitment to the region. Our decision to make Bahrain our key manufacturing hub for the MENA region demonstrates our confidence in the Kingdom’s rapidly growing manufacturing sector and alignment with the nation’s Economic Vision 2030 diversification plans.

The Arla Foods CEO added, “Dairy is an integral part of a healthy diet and this new facility will enable us to increase production and step change our innovation speed to meet increasing consumer demand. We are confident that Bahrain will be instrumental to the success of Arla’s growth plans and we are grateful to our local partners and the government whose unwavering support and dedication have made today possible.”

Welcoming the project, Mr. Khalid Humaidan, Chief Executive, Bahrain EDB, said: “Arla is the latest in a long line of international manufacturing companies to make Bahrain a home for their regional operations. Today’s inauguration of Arla’s largest facility outside Europe is testament to Bahrain’s position as a leading destination for manufacturing companies looking to access the region’s USD1.65 trillion market. The Kingdom offers investors a number of competitive advantages, including the availability of a highly skilled local work force and extremely competitive operating costs.”

Private training institutions are set to re-open on September 3, after several months of suspension, as part of the kingdom’s measures to combat the...
Read more

CrediMax announced its latest feature on its Loyalty program “Thameen” where cardholders are now able to redeem their points and “donate” to the Royal...
Read more
Inside Bahrain

The Asian Football Confederation (AFC) has announced Bahrain as hosts of the 2020 AFC Cup West Zone matches in Groups A. AFC has also confirmed...
Tech

Zain Bahrain, a leading telecommunications provider in the Kingdom virtually hosted the 4th edition of ‘Zainnovate’ in partnership with Alkeri Partners, a Bahrain based...
Management Principles