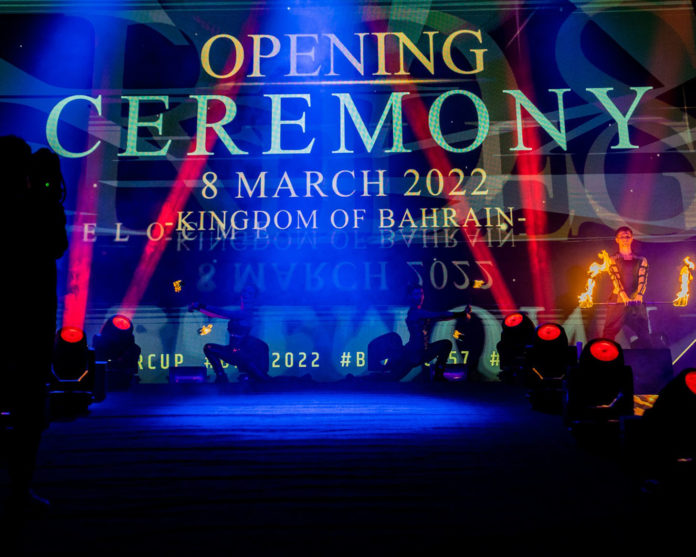 His Highness Shaikh Khaled bin Hamad Al Khalifa, First Deputy Chairman of the Supreme Council for Youth and Sports, President of the Public Sports Authority and President of the Bahrain Olympic Committee, inaugurated the activities of the BRAVE International Combat Week 2022, which is being held under the patronage of His Highness, and is organized by the Bahrain Mixed Martial Arts Federation (BMMAF) in cooperation with the International Martial Arts Mixed Federation (IMMAF) and the Khalid Bin Hamad Sports Organization (KHK SPORTS) at Khalifa Sports City from March 8-12, which will hold the first edition of MMA SUPER CUP, the largest amateur mixed martial arts tournament, and the 57th edition of the BRAVE Combat Federation, which will witness a Bantamweight World Championship Title fight between The Pride of Bahrain Hamza Kooheji and SBG Ireland’s Brad Katona.

On this occasion, His Highness Shaikh Khaled bin Hamad Al Khalifa affirmed that the Kingdom of Bahrain has become an ideal destination, to host major continental and international tournaments and forums, thanks to the sponsorship and support that Bahraini sport is witnessing from His Majesty King Hamad bin Isa Al Khalifa, the King of Bahrain, and the interest and support of His Royal Highness Prince Salman bin Hamad Al Khalifa, Crown Prince and Prime Minister.

“We have outlined our vision to support the sport of mixed martial arts, which has become the focus of everyone’s attention around the world. Bahrain has achieved wide successes in this sport, and was able to reach the top of the IMMAF classification, and the establishment of BRAVE Combat Federation had a clear impact in setting our goals for global expansion, which strengthened the presence of the Kingdom of Bahrain in this global sport,” says His Highness Shaikh Khaled bin Hamad Al Khalifa.

His Highness continued: “Bahrain is the favorite destination for the International Mixed Martial Arts Federation, after it gained the confidence of the Federation in its wonderful and distinguished organization of three copies of the World Championship. This granted it hosting and organizing the first version of the MMA Super Cup for the amateur MMA teams, which will launch from the Kingdom of Bahrain, as an approved competition within the competitions of the International Federation.”

His Highness Shaikh Khalid bin Hamad Al Khalifa indicated that holding BRAVE CF 57 constitutes a great opportunity to meet professionals from different countries, who compete in this special edition, which will witness 3 important events, most notably the main event in which the Bahraini professional Hamza Kooheji will face the Canadian athlete Katona in a Bantamweight World Championship. His Highness explained that this version will enhance the qualitative leaps achieved by the Kingdom of Bahrain at the level of this sport, which enhances its continuous efforts to support the sport of mixed martial arts, continentally and internationally.

His Highness praised Bahrain’s remarkable success in the opening ceremony, which is clear evidence of the professional level of Bahraini youth in organizing tournaments, explaining that the opening ceremony was very impressive, and expressed the Kingdom’s originality and its keenness on its permanent rapprochement with the countries of the world. His Highness noted that the efforts of the Bahrain Mixed Martial Arts Federation and the cooperation of the International Mixed Martial Arts Federation and the Khalid Bin Hamad Sports Organization achieved the work in the spirit of one team and produced this event in a distinctive way that supports Bahrain’s reputation and standing at the global level. His Highness also expressed his wishes to witness strong and exciting fights among all athletes.

BRAVE International Combat Week is taking place in the Kingdom of Bahrain from March 8 to 11 at Khalifa Sports City. It will include the inaugural MMA Super Cup, the largest amateur mixed martial arts tournament in the history of combat sports, and BRAVE CF 57 headlined by 3 World Championship title fights. The event will be broadcasted worldwide on OKKO, DAZN, MBC / SHAHID.NET, Arena Sport, O2, FIGHTING.DE, LOOKSPORT+,  BAHRAIN TV, and BRAVE CF TV.