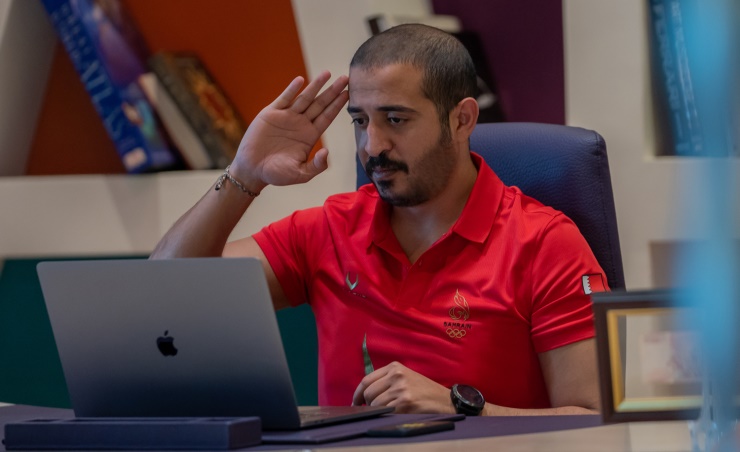 HH Shaikh Khalid bin Hamad Al Khalifa, First Deputy Chairman of the Supreme Council for Youth and Sports, Chairman of the General Sports Authority and President of Bahrain Olympic Committee has stressed the importance of continuing the heroic performances in the 32nd Olympic Games, currently taking place in the Japanese capital Tokyo.

His Highness urged the national handball team’s players to continue making the honourable efforts in order to achieve the results that reflect the genuine position of the handball sport in the Kingdom of Bahrain at the regional, continental and global levels.

HH Shaikh Khalid conveyed to the players the greetings and best wishes of HM King Hamad bin Isa Al Khalifa, in their journey in the Olympic games as well as the interest and keenness of HRH Prince Salman bin Hamad Al Khalifa, Crown Prince Prime Minister to create an ideal environment for them during the participation.

His Highness Shaikh Khalid also conveyed to them the greetings of HH Shaikh Nasser bin Hamad Al Khalifa, Representative of HM the King for Humanitarian Work and Youth Affairs and His Highness’ follow-up to their journey as well as High Highness’ best wishes for them to achieve the best results.

HH Shaikh Khalid encouraged the players to continue their heroic performance that reflect their high spirit and desire to raise Bahrain’s flag high. “You have to enjoy the sports competitions and give your all. We ought to continue on the same path we have been following and strive to go further in the Olympics,” HH Shaikh Khalid said.

HH Shaikh Khalid expressed confidence in the players to continue honouring their representation of the Kingdom of Bahrain in the competition and reach the last eight round which will be a historic achievement for the Kingdom’s handball sport in the Olympics.

The national team players thanked HH Shaikh Khalid for His Highness’ support, pledging to give their best in their coming matches.