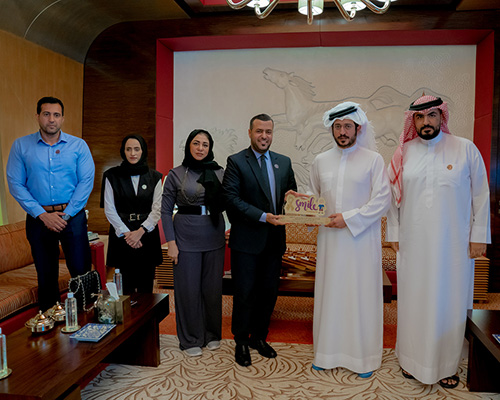 “Smile” initiative, which is concerned with providing psychological and social support to children with cancer and their parents, operates under the society’s umbrella. The board Chairman and members extended most sincere thanks and appreciation to HH Shaikh Khalid bin Hamad Al Khalifa for meeting recently with a number of children with cancer who are affiliated with the initiative.

His Highness praised the remarkable contributions of the Bahraini youth in serving various sectors in the kingdom, under the reform project of His Majesty King Hamad bin Isa Al Khalifa. He also lauded the tremendous efforts of the government, led by His Royal Highness Prince Salman bin Hamad Al Khalifa, Crown Prince and Prime Minister, to enhance the youth’s role in developing the society.

HH Shaikh Khalid bin Hamad Al Khalifa welcomed the Board Chairman and members of Al-Mustakbal Youth Society, commending their role in serving the youth sector, in addition to the children with cancer. He expressed keenness on more achievements and steps to develop the youth and voluntary work. He got assured about the social, family and health conditions of the children with cancer who are cared for by “Smile” initiative. He directed to integrate those children in various sport and social activities and take the necessary procedures to provide them with the needed care. He encouraged those children to continue struggling bravely to defeat the disease.