Social media are applications, services, and systems...
Sports This WeekHH Shaikh Khalid bin Hamad Witnesses the Battles of the First Round of the Event 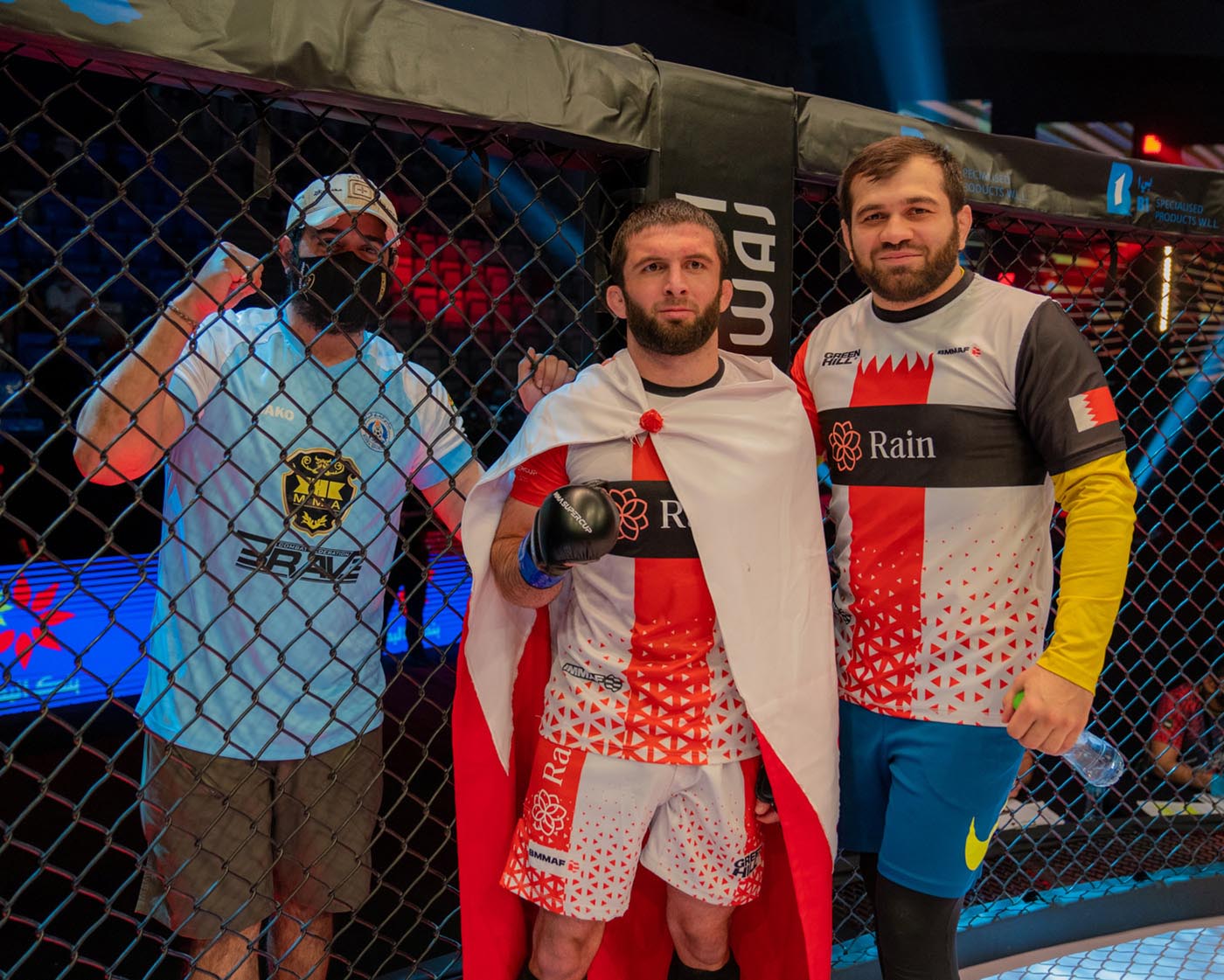 His Highness Shaikh Khalid bin Hamad Al Khalifa, First Deputy President of the Supreme Council for Youth and Sports, President of the General Sports Authority and President of Bahrain Olympic Committee, witnessed the first round of fights of the first edition of the MMA Super Cup which is held within the activities of the BRAVE International Combat Week.

The event is being held under the patronage of His Highness and organised by the Bahrain Mixed Martial Arts Federation (BMMAF), in cooperation with the International Mixed Martial Arts Federation (IMMAF) and the KHK SPORTS. The event will also feature BRAVE CF 57 which will take place on Friday March 11 headlined by a BRAVE CF World Bantamweight Title between Hamza “The Bahrain of Pride” Kooheji and Brad “Superman” Katona.

On this occasion, HH Shaikh Khaled bin Hamad Al Khalifa praised the levels witnessed by the competitions on the first day of the championship, stressing that the displays delivered by the fighters reflect their strong preparations ahead of the Championship. His Highness added that the MMA Super Cup carries high value and is a great addition to the competitions organised by the IMMAF, stressing that it will contribute to advancing the MMA sport globally. Finally, HH Shaikh Khalid wished the participants the best of luck.
Bahrain is a global center for MMA
From his side, HE Mr  Aymen bin Tawfiq Almoayed affirmed that the vision of HH Shaikh Nasser bin Hamad Al Khalifa, Representative of HM the King for Humanitarian Works and Youth Affairs and President of the Supreme Council for Youth and Sports has made the Kingdom of Bahrain a preferred destination for holding various sports events and activities on its soil due to the Kingdom’s distinguished elements as well as modern sports infrastructure. He pointed out that the interest of HH Shaikh Khaled bin Hamad Al Khalifa to organise this prestigious event has put the Kingdom at the centre of the world’s attention.

“HH Shaikh Khaled bin Hamad Al Khalifa is making outstanding efforts in promoting MMA sport, not only at a local level, but also at the regional and global levels through tangible steps. And this includes the exceptional initiatives launched by His Highness to form a solid base for this sport, and encourage young people to practice it, so that Bahrain can become a global hub for the MMA sport,” he said, adding: “The vision of HH Shaikh Khaled in organising the BRAVE International Combat Week will have an important role in raising the skills of the Kingdom’s fighters and giving them the ability to compete and achieve great accomplishments in the name of Bahrain. Moreover, the tournament will be a suitable place to confirm Bahrain’s capabilities and leadership in this sport at the global level.”

The Minister of Youth and Sports Affairs concluded, saying: “We are fully confident that the event’s Organising Committee, with its capabilities, high efficiency and distinguished expertise, and the national cadres it has, is able to bring out the global forum in a distinct way from an organisational point of view and confirm the position of the Kingdom of Bahrain as a major host for prestigious sports events.


Hamza Kooheji Receives Wide Support
A number of Bahraini personalities gave their great support to Team Bahrain participating in the MMA Super Cup, in addition to the Bahraini fighter Hamza Kooheji, who is due to compete for the Bantamweight World Championship title at BRAVE CF 57.

Bahraini personalities recorded many video clips in support of the Bahraini team participating in the tournament, where they shared supportive messages.

The Bahraini fighter Hamza Al Kooheji also received great encouragement from the local community as many celebrities recorded video clips to express their tremendous support to him.

Kooheji also launched an appeal to all fans to attend BRAVE CF 57 which will take place on Friday, and support him in his upcoming meeting against Brad “Superman”Katona for the world bantamweight title, stressing that the presence of the Bahraini fans at the Khalifa Sports City hall will increase the enthusiasm and excitement and give him a morale boost to compete strongly for the title.

The Semi-Finalists
The teams of Bahrain, Ireland, Mexico and Kazakhstan managed to advance to the semi-finals of the MMA Super Cup. The results of the first round include Ireland’s 5-4 victory over Oceania. Meanwhile, Mexico defeated the Arab champions team 5-4, while Kazakhstan outclassed the Balkan Champion with five clean victories. Finally, Bahrain secured a resounding 7-2 victory over Tajikistan.

The semi finals will take place on Thursday, starting at 15:00 (GMT+3) with Mexico facing Ireland. Bahrain will take on Kazakhstan at 18:30 (GMT+3).

Team Bahrain made a strong start in the tournament after its victory over Tajikistan, where the fighters showcased great capabilities, confirming their intention to win the title. Team Bahrain was the only team in the tournament to finish all 9 rounds, despite gaining a leading victory by the 7th round. This is a testament to the dedication the team possesses to proving to the world that Bahrain has the number one amateur mixed martial arts team in the world.