Audiences of all ages were treated to...
CultureInside BahrainHH Shaikh Khalid receives Information Minister, 'Your Talent at Home' competition jury 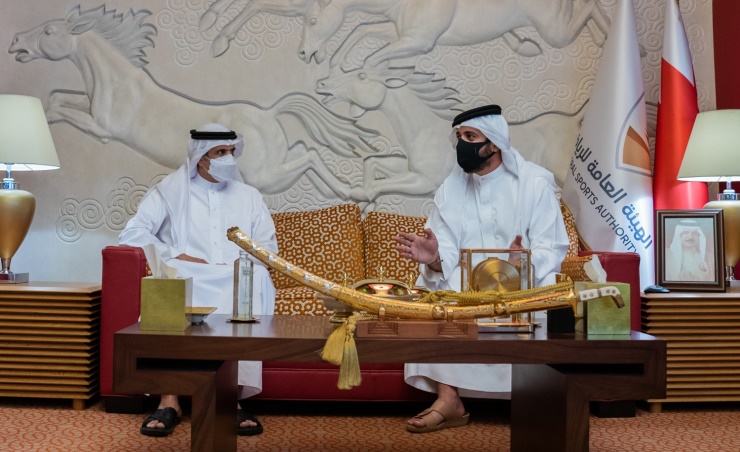 First Deputy Chairman of the Supreme Council for Youth and Sports (SCYS), Chairman of the General Sports Authority and President of the Bahrain Olympic Committee, HH Shaikh Khalid bin Hamad Al Khalifa, has appreciated the role played by the national media in supporting the programmes and initiatives aimed at developing Bahraini youth, and contributing to honing their skills so as to be able to better serve the society.

HH Shaikh Khalid was speaking while receiving Information Minister, Ali bin Mohammed Al-Romaihi, and the jury of the “Your Talent at Home” competition.

HH Shaikh Khalid commended the distinguished efforts exerted by the Information Ministry to promote the youth movement in the kingdom, through its wide coverage of the youth events that contribute to highlighting the true image of Bahrain as a country that supports youth in various fields, thanks to the care of His Majesty King Hamad bin Isa Al Khalifa, the distinguished efforts of His Royal Highness Prince Salman bin Hamad Al Khalifa, the Crown Prince and Prime Minister, and the follow-up of HM the King’s Representative for Humanitarian Work and Youth Affairs and SCYS Chairman, HH Shaikh Nasser bin Hamad Al Khalifa.

HH Shaikh Khalid asserted that the media is an essential partner in developing various fields, particularly youth, which reflects positively on enhancing the prestigious reputation and status enjoyed by the kingdom in the youth field at the continental and international levels.

In this regard, HH Shaikh Khalid bin Hamad affirmed the major role played by the media in covering the “Your Talent at Home” competition and projecting the real image of Bahraini youth’s talent and great creative potentials, commending the distinguished efforts exerted by the event’s jury to ensure its success.

HH Shaikh Khalid stressed that the rapid developments witnessed by the media in the transmission of information, news and reports, especially at the level of social media platforms, are the weapon that must be used to serve Bahrain’s progress march.

Information Minister said that HH Shaikh Khalid’s qualitative initiatives contribute to supporting youth and other members of the Bahraini society, through creating opportunities for them to participate and be creative in various fields.

He affirmed the Information Ministry’s great interest in covering events and competitions aimed at enriching the Bahraini youth movement, expressing pride in the Ministry’s keenness to harness all its potentials to cover the “Your Talent at Home” competition in a way that meets the aspirations of HH Shaikh Khalid’s aspirations and ensures the success of such a youth-oriented initiative.

Members of the “Your Talent at Home” competition expressed deepest thanks to HH Shaikh Khalid for his trust and support, lauding his distinguished efforts to support Bahraini youth.