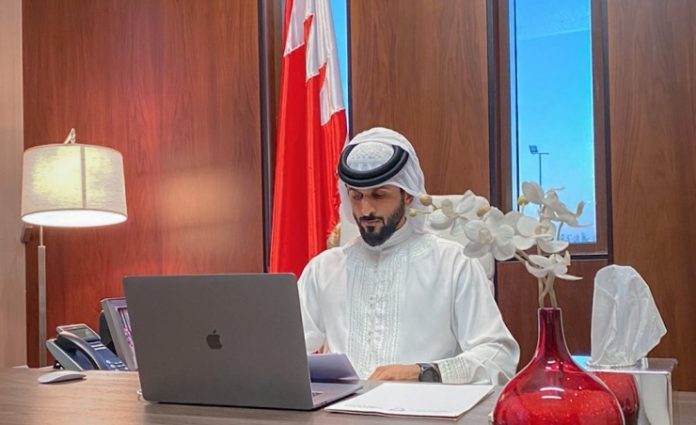 His Majesty the King’s Representative for Humanitarian Work and Youth Affairs  His Highness Shaikh Nasser bin Hamad Al Khalifa hailed the UAE landmark achievements which, he said, represents a source of pride for the Arab and Islamic nations and encourages youth to get interested in space exploration.

The UAE Embassy in Bahrain organized the event along with the Mohammed bin Rashid Space Centre, the National Space Science Authority (NSSA) , with the participation of more than 300 people remotely.

He underlined the vision of His Majesty King Hamad bin Isa Al-Khalifa to set up the space sector in the Kingdom of Bahrain, highlighting the royal directives at the opening of the 3rd session of the 5th legislative term to acquire future sciences and technology, including space sciences.

He underlined HM the King’s keenness on developing national cadres and developing the space sector, pointing out in this regard the establishment of the National Space Science Authority (NSSA).

He commended solid relations binding the two brotherly countries and people, looking forward to bolstering joint cooperation in the sector of space sciences and being for the UAE expertise which yielded a number of projects, in addition to exchanging expertise and building national competences.

He pointed out in this regard the selection of a Bahrain space team, in cooperation with the UAE Space Agency, and the joint project to build a satellite in addition to training programmes.

He urged the Bahraini and GCC and Arab youth to benefit from the encouraging opportunities provided by sincere and responsible leaders in their countries in order to innovate and excel in all fields.

UAE Ambassador to the Kingdom of Bahrain HH Shaikh Sultan bin Hamdan Al-Nahyan addressed the virtual forum, welcoming the participation of His Majesty the King’s Representative for Humanitarian Work and Youth Affairs  His Highness Shaikh Nasser bin Hamad Al Khalifa in session along with Emirati astronauts.

He commended the keenness of Emirati astronauts Hazza Al Mansouri and Sultan Al Nayadi to take part in the forum and shed light on their rich experience as part of the :Zayed Ambitious Mission”.

He stressed the keenness of the UAE leadership to inspire and motivate the youth to embark in space exploration, highlight the success trip of Hazza Al Mansouri to the International Space Station (ISS) which represented an historic step for the United Arab Emirates.

They stressed their passion for space exploration as well as the difficulties which confronted them and highlighted the UAE impressive success in the space sector, stressing preparations to send the first UAE manned mission into space.