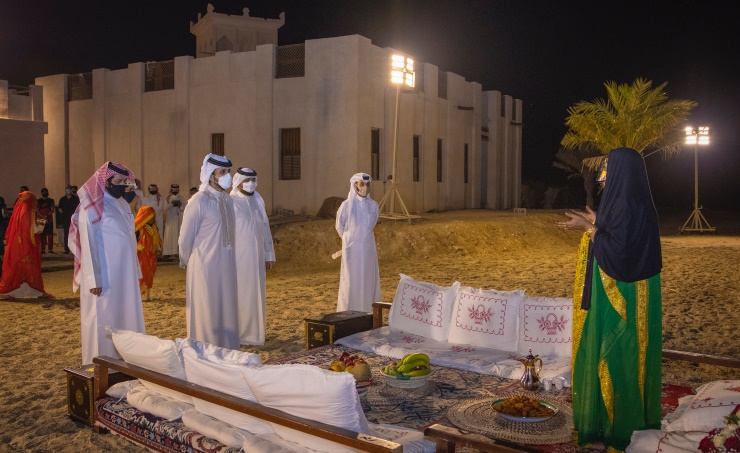 HM the King’s Representative for Humanitarian Work and Youth Affairs, His Highness Shaikh Nasser bin Hamad Al Khalifa, has given directives to double the number of cars offered in the “Al-Sariyah” TV quiz show”, broadcast on Bahrain TV.

HH Shaikh Nasser ordered to add six cars to the competition so that one car is drawn every two days, in line with HH’s support for the great successes achieved by the show in its second edition.

HH Shaikh Nasser gave the directives while visiting the site of the production of the quiz show, at the Bahrain Heritage Village, along with the Chairman of the Inherited Sports Committee at the Supreme Council for Youth and Sports, Khalifa bin Abdulla Al-Qaoud.

HH Shaikh Nasser affirmed that the programme has achieved many of its goals, set by the Inherited Sports Committee, noting that it aims to increase the knowledge of the Bahraini, GCC and Arab societies of the rich history of Bahrain and the deep-rooted culture of its people.

HH Shaikh Nasser indicated that the “Al-Sariyah” quiz show seeks primarily to foster the values of national unity and belonging to the homeland, stressing his directives to continue supporting such a successful programme which he described as a bridge of communication between past, present and future generations.

HH Shaikh Nasser commended the efforts exerted by the crew of the successful TV show, paying tribute to presenters Hassan Mohammed, Nayla Janahi and artist Salwa Bakhit for the outstanding efforts they are making.

HH Shaikh Nasser also met the General Supervisor of the Al-Sariyah TV quiz show, Isa Al-Motawa, and lauded the efforts he is exerting to ensure the continued success of the programme.