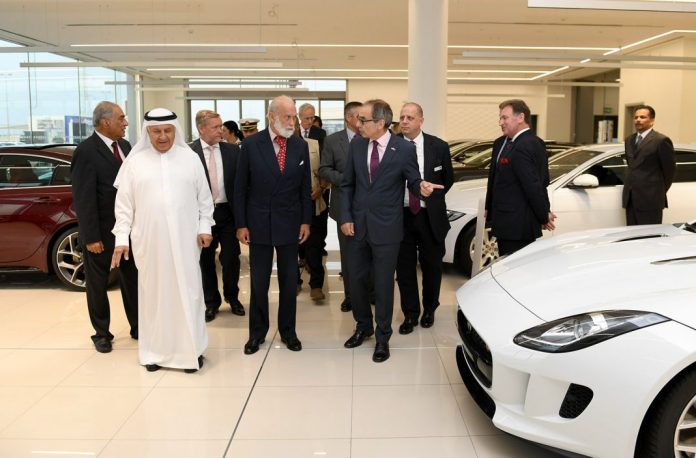 Euro Motors, the exclusive importer and distributor for luxury automotive manufacturer Jaguar Land Rover in the Kingdom of Bahrain, proudly welcomed His Royal Highness Prince Michael of Kent to the Euro Motors Jaguar Land Rover Showroom on the 12th of July, 2017.

Standing as a testament to the strong ties between Bahrain and the United Kingdom, Euro Motors Jaguar Land Rover welcomed one of Britain’s most prominent and philanthropic Royal Family members, His Royal Highness Prince Michael of Kent, the first cousin of Her Majesty The Queen. The event was also attended by the U.K. Ambassador to Bahrain Mr. Simon Martin along with a number of senior members of the business community in Bahrain.

His Royal Highness Prince Michael has had strong interests in motoring and transport and his affinity towards the automotive sector has been well documented with his patronage of various societies and institutions, including and not in the least limited to His Royal Highness being the president of the Royal Automobile Club, a Patron of the Institute of the Motor Industry, the President of the Council of the Motor Sports Association and a Patron of the Veteran Car Club of Great Britain.

Speaking on the historic visit, Mr. Majid Al Zayani, the Managing Director of Euro Motors Jaguar Land Rover, said: “Firstly, I would like to take this opportunity to express my gratitude towards both His Royal Highness Prince Michael of Kent and His Excellency the U.K. Ambassador to Bahrain Mr. Simon Martin for having graced us with their presence. This visit stands as a testament to the longstanding relationship that is shared between Bahrain and Britain, and in the same vein, between Euro Motors and Jaguar Land Rover Limited.”

“Our well established partnership with Jaguar Land Rover Limited dates back to 1949, when the Al Zayani Family in Bahrain became one of the first Distributors of Land Rover in the region. After 68 years of being the exclusive retailer of Land Rover vehicles in the Kingdom of Bahrain, we now have a strong base and look forward to maintaining the success and reputation of the Land Rover brand here with the support of our loyal partners and customers. Having shown steady growth and dedication, their trust in us was renewed when Euro Motors was appointed as the exclusive Importer and Distributor for Jaguar in Bahrain as well in October 2013. What is seen here is an acknowledgement of our successful past and the confidence in the bright future we have with Jaguar Land Rover. Finally I would like to convey my utmost appreciation to our valued guests for sharing this occasion with us and for their continued support and investment in the region.” he added.

Batelco and Wanclouds have signed a partnership to deliver Multi-Cloud Migration solutions, which is being introduced to Bahrain for the first time. Wanclouds, an...
Read more
PR This Week

The Information & eGovernment Authority (iGA) launched an updated version of its interactive conferencing system, eMeeting, which has been revamped to include several performance-enhancing...
Read more
PR This Week

If you are guarantor citizen for employees, residents with no guarantor or Bahrain visitor, you may extend the visa with eVisa range of services...
PR This Week

GFH Financial Group (“GFH”), the leading investment group in the Middle East, has expanded its presence in the retail sector by acquiring 80% of...
Inside Bahrain

Under Armour, has officially opened its very first brand house in the Kingdom of Bahrain. The new store is located in the premier shopping...
PR This Week

The National Health Regulatory Authority has approved the emergency use of Covishield, the Covid-19 vaccine produced by AstraZeneka in cooperation with the University of...
Inside Bahrain

The Information & eGovernment Authority (iGA) launched an updated version of its interactive conferencing system, eMeeting, which has been revamped to include several performance-enhancing...
Inside Bahrain

The National Taskforce for Combating the Coronavirus (COVID-19) has announced in today’s press conference that the new COVID-19 variant has been discovered in Bahrain. Precautionary...
© GO ALIVE MEDIA
MORE STORIES

The National Taskforce for Combating the Coronavirus (COVID-19) provides an update...