Have you ever wondered about the differences...
CultureInside BahrainHM King asserts Bahrain's support to UN peace-keeping efforts 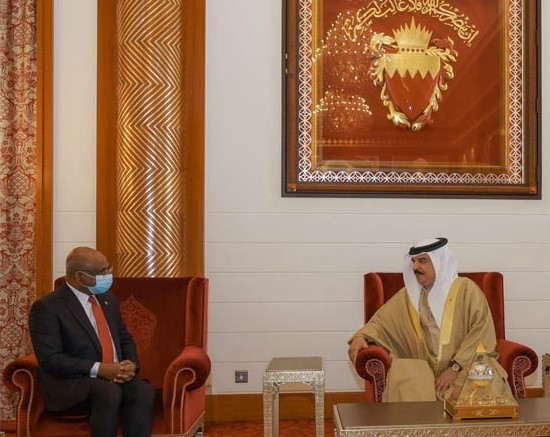 His Majesty King Hamad bin Isa Al Khalifa received at Safriya Palace  President of the 76th session of the United Nations General Assembly (UNGA) and Minister of Foreign Affairs of the Republic of Maldives, Abdulla Shahid.

HM the King welcomed him and his accompanying delegation and congratulated him on assuming the presidency of the current session of the UN General Assembly.

He wished him every success in serving issues related to fostering global peace and stability.

His Majesty reviewed cooperation between the Kingdom of Bahrain and the UN in various development fields, stressing Bahrain’s keenness to strengthen cooperation and build sound partnerships with the international organisation and its agencies.

He also voiced the kingdom’s keenness on enhancing friendly relations with the Republic of Maldives.

HM the King pointed out Bahrain’s development strides and achievements, stressing the remarkable contribution of Bahraini women to the kingdom’s development process, political life and their assumption of high-profile posts at the local, regional and international level.

HM the King underscored Bahrain’s civilizational and historical role and its pioneering initiatives to promote intercultural dialogue and cooperation and peaceful coexistence.

He also pointed out the kingdom’s humanitarian efforts to provide relief aid to the needy, praising tolerance and peaceful coexistence characterizing the Bahraini society.

HM the King discussed with the UNGA President regional and international developments of common concern.

He affirmed Bahrain’s support to the pivotal role of the UN to foster peace, security and stability worldwide.

The UNGA President expressed happiness about visiting the Kingdom of Bahrain, extending thanks and gratitude to HM the King for the gracious welcome and hospitality.

He lauded comprehensive development in the Kingdom of Bahrain and the kingdom’s efforts to meet the UN goals.

He hailed strong cooperation between the Kingdom of Bahrain and the UN and its agencies, praising solid relations between Bahrain and the Republic of Maldives and wishing the kingdom further growth and prosperity.