Under the patronage of His Royal Highness...

Complete attention to the road ahead, behind...
CultureInside ArabiaHM King attends 42nd summit of the Supreme Council of the Gulf Cooperation Council (GCC) 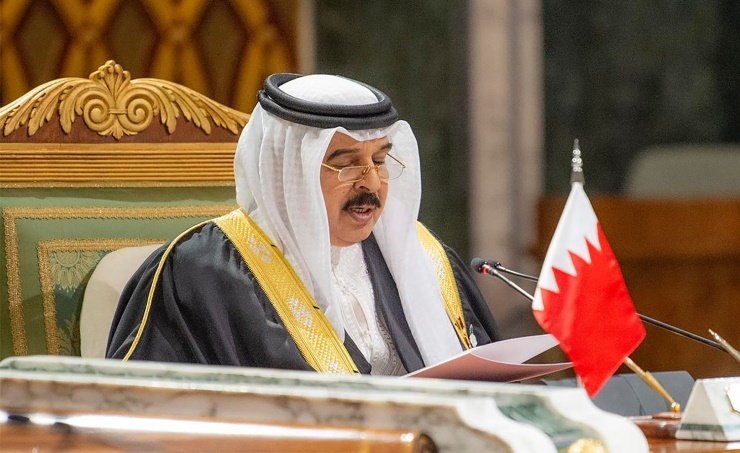 His Majesty King Hamad bin Isa Al Khalifa attended the opening session of the 42nd summit of the Supreme Council of the Gulf Cooperation Council (GCC).

HM the King also delivered a speech wishing the current session, chaired by the Kingdom of Saudi Arabia, success and commended the results of the Saudi Crown Prince’s visits to the GCC countries, which paved the way for the summit and reflected the Saudi-led role in achieving rapprochement to overcome challenges, and find solutions that meet the requirements of the current phase towards further progress, prosperity, strength and stability for the Gulf countries.

HM the King stressed Bahrain’s keenness, as chair of the 41st session, to follow-up on the implementation of the joint action agenda, which yielded important steps that serve the interest of the council and contributed to enhancing its standing.

He underscored the importance of the Al Ula Declaration, which stipulated the implementation of the vision outlined by Custodian of the Two Holy Mosques King Salman bin Abdulaziz Al Saud through a well-defined timeline and keen follow-up of bilateral work between GCC states to settle all stalled issues.

He underlined the need to complete the requirements of the economy unity, joint development programmes and the defence and security systems, in addition to coordinating stances to strengthen the GCC states’ solidarity, stability and unity, towards bolstering their regional role in cooperation with the international community, regional and international organisations.

HM the King commended the GCC General Secretariat and its work team, led by Secretary General Dr. Nayef bin Falah bin Mubarak Al Hajraf, hailing their efforts to enhance the council’s work as well as their tangible contributions to the organization of this summit, hoping more unity would be achieved.