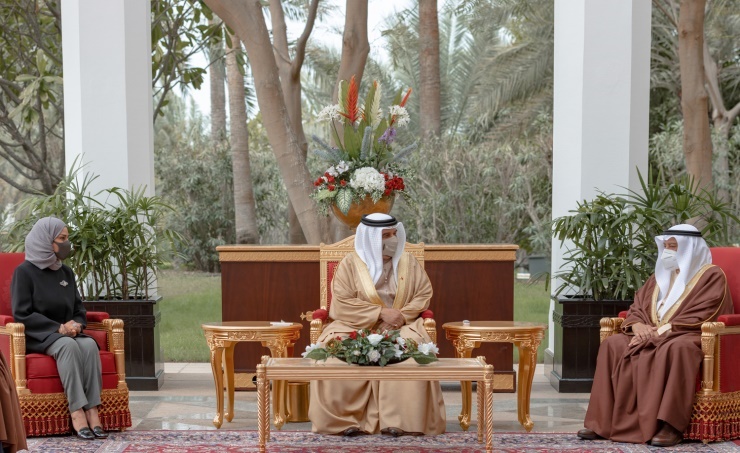 His Majesty King Hamad bin Isa Al Khalifa has expressed pride in the tremendous efforts exerted by the Legislative Branch to carry out its constitutional and supervisory responsibilities and duties, as well as to promote the democratic concepts emanating from the deep-rooted national culture and values.

This came as HM the King received, at the Al-Sakhir Palace, the Speaker of the Council of Representatives, Fawzia bint Abdulla Zainal, and Chairman of the Shura Council, Ali bin Saleh Al-Saleh, in addition to their deputies.

Zainal and Al-Saleh submitted to HM the King the two chambers’ replies to the keynote royal speech delivered by HM while opening the Third Session of the Fifth Legislative Term.

HM King Hamad expressed thanks and appreciation to the Shura and Representatives councils for their role in supporting the comprehensive development march in the kingdom, defending the interests of the nation and developing the legal and legislative system in a way that meets the citizens’ aspirations.

HM the King lauded the content of the two councils’ replies to the keynote royal address to the nation, and their keenness to enhance the democratic process and improve its performance, appreciating the current level of cooperation and coordination between the Executive and Legislative branches to build on the previous achievements and gains towards strengthening the pillars of the national progress march.

While tackling local issues, particularly the latest developments of the fight against the novel coronavirus (COVID-19), HM the King expressed deep pride in the noble humanitarian efforts exerted by Team Bahrain, led by His Royal Highness Prince Salman bin Hamad Al Khalifa, the Crown Prince and Prime Minister, and all the relevant authorities that are dedicated to implementing all measures to limit the spread of the pandemic.

HM King Hamad expressed appreciation for the important successes made by Bahrainis across various fields, voicing pride in their keenness to enhance the kingdom’s leading status and lift its banners at all international gatherings.

Shura Chairman, Speaker and all those present expressed their thanks and appreciation to HM The King for his sound directives and support for the Legislative branch, which, they said were a catalyst for enriching parliamentary work and attaining more achievements for Bahrain and its dear people.

In its reply to the keynote royal speech, the Council of Representatives offered sincere condolences over the passing of His Royal Highness Prince Khalifa bin Salman Al Khalifa, may Allah the Almighty rest his soul in eternal peace.

The Council pleaded with HM the King to ensure that all medical and security teams, as well as employees and volunteers in the frontlines enjoy the royal care.

It also requested HM the King to give directives to the Education Ministry to provide more scholarships in the modern fields and future disciplines for secondary education graduates.

In its reply, the Council of Representatives also expressed hope that the “Feena Khair” Campaign would continue to relieve the distress of the needy citizens and residents.

The Council also extended deepest thanks to HM the King for his directives to set up a hi-tech specialist hospital for infectious diseases, and for issuing a Royal Decree to establish the Hope Fund to support youth projects.

The Council also expressed hope that HM the King would give directives to expedite the employment of jobless Bahrainis so as to facilitate Bahraini youth’s involvement in all professions that match their qualifications.

The reply also stressed that it agreed with HM the King on the need to address the negative effects on the local environment, given their direct relation to the human beings, as well as their economy, progress and existence.

The Council also extended sincere thanks to all the affiliates of the kingdom’s armed forces, including the Bahrain Defence Force, the Interior Ministry and the National Guard, for the tangible efforts they are making to defend Bahrain and its people.

It also affirmed that it shared with HM the King his view regarding the Palestinian issue, noting that it has been his main concern and fundamental cause, as reflected in all keynote royal speeches.

The Council of Representatives asserted that the vision enshrined in the royal keynote speech is a beacon for the national action in the coming period, especially in the post-pandemic one.

As to the Shura Council, it expressed, in its reply to the royal address on the inauguration of the new parliamentary session, deep pride in HM the King’s support for the legislative branch, noting that the wise and far-sighted visions embedded in it represent guidelines for achieving the best for the kingdom.

It asserted that HM the King’s speech highlighted all the landmark achievements across all fields, and included a roadmap for carrying on the national comprehensive development march towards more progress and prosperity.

In their reply, Shura members expressed deep pride in the precious royal trust bestowed upon them, pledging to spare no efforts in undertaking the duties entrusted to them, in accordance with the sound royal directives.

The Council expressed pride in HM the King’s praise of Bahrain’s model in confronting the pandemic, highlighting Bahrain’s success in dealing with the exceptional circumstances created by COVID-19, citing the precautionary measures put in place by the National Medical Taskforce to Combat Coronavirus, and the economic stimulus packages launched by the government to mitigate the effects of the pandemic.

It also praised HM the King’s directives to adopt modern methods, and take full advantage of the sciences of the future while dealing with emergency crises.

It also paid tribute to HM the King for thanking those who contributed to the “Feena Khair” Campaign which highlighted the true mettle of Bahrainis and fostered the deep-rooted Bahraini values of community partnership.

The Shura Council said that HM the King’s vision on the need to give top priority to the speedy recovery of the national economy, in cooperation with the private sector, requires concerted efforts and initiatives that would support the kingdom’s endeavours to return to the positive economic growth rates.

The Council also backed the royal call for public and private investment institutions to invest more in value-added fields, especially regarding digital transformation, the medical sector and self-sufficiency, within the framework of constructive Legislature-Executive cooperation.

In its reply, the Shura Council also praised HM King Hamad’s confirmation of the kingdom’s fundamental stances vis-à-vis regional issues and international relations based on the principles of good neighbourliness and consolidation of cooperation with brotherly and friendly countries.

The Council also praised HM the King’s appreciation of the crucial patriotic role played by the armed defence and security forces to safeguard the kingdom’s social stability.