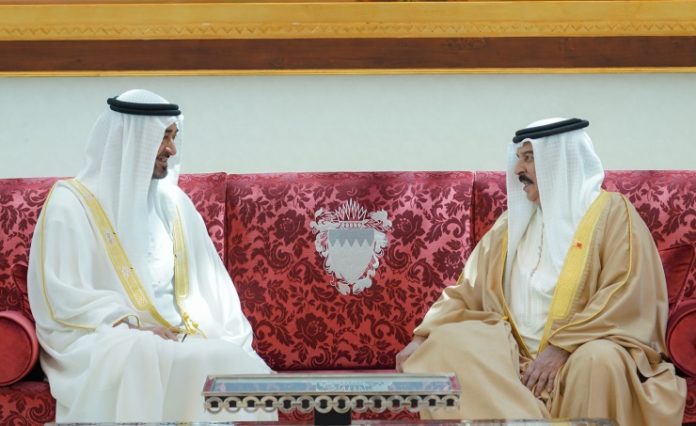 His Majesty King Hamad bin Isa Al Khalifa has affirmed the depth of the brotherly relations between Bahrain and the United Arab Emirates, which are based on a long history of solid ties and common stances established by the founding fathers and preserved thereafter by their citizens.

HH Shaikh Mohammed bin Zayed, who is on a brotherly visit to Bahrain, conveyed to HM the King the greeting of UAE President, HH Shaikh Khalifa bin Zayed Al-Nayhan.

HM King Hamad requested the Abu Dhabi Crown Prince to convey his greetings to the UAE President, as well as his wishes of further progress and prosperity to his brotherly country.

HM the King lauded the unprecedented high-level reached by the two countries’ relations, citing their constant coordination, similar ambitious policies, common visions to safeguard security and stability, protect maritime navigation from any potential threats that may put global trade at risk, and resolve to carry on their progress march, which is widely appreciated regionally and internationally.

HM the King expressed deep pride in the UAE’s firm supportive stances towards Bahrain at all levels.

HM King Hamad stressed the pivotal great role played by the UAE to strengthen the pillars of security and stability in the region and the world, highlighting its unwavering commitment towards brotherly and neighbouring countries to fend off dangers, face terrorist threats to countries’ security and stability, and its constant support for development plans in the region and the world, affirming its pioneering and important role in promoting peace, good and prosperity.

HM the King lauded the development strides currently witnessed by the UAE, citing its advanced programmes in developing atomic energy, space sciences, medical sciences, sustainable energy and other fields, which proves its advanced civilisational position achieved thanks to the efforts of its people in a way that contributes to serving all humanity, which, he said, is a source of pride for the Arab and Islamic nations, as well as the world.

During the meeting, HM the King and Abu Dhabi Crown Prince reviewed regional and international issues, in addition to the two countries’ cooperation bilaterally, and at the international level to face challenges and deal with various developments.

HM King Hamad hosted a lunch banquet in honour of the Abu Dhabi Crown Prince and his accompanying delegation.

Earlier today, HM the King welcomed the Abu Dhabi Crown Prince and Deputy Supreme Commander of the UAE Armed Forces upon arrival in the kingdom on a brotherly visit.

The Guard of Honour saluted the kingdom’s distinguished guest.