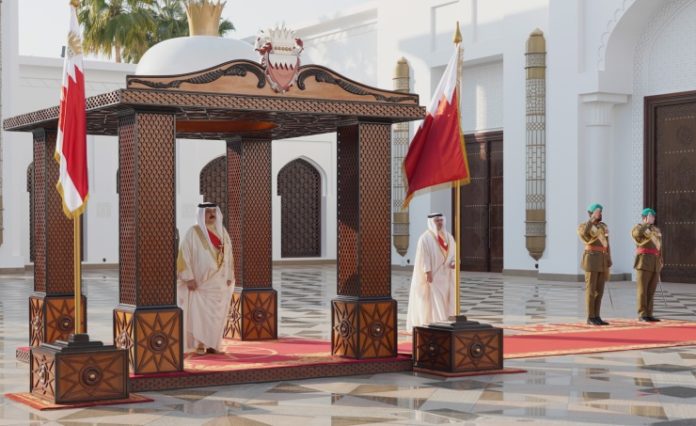 His Majesty King Hamad bin Isa Al Khalifa  patronised, in the presence of His Royal Highness Prince Salman bin Hamad Al Khalifa, the Crown Prince and Prime Minister, the celebration held at the Al-Sakhir Palace on the occasion of the kingdom’s National Days, in commemoration of the establishment of the modern Bahraini State as an Arab and Muslim state, founded by Ahmed Al Fateh in 1783, and the anniversary of His Majesty the King’s Accession to the Throne.

The National Anthem was played and the artillery fired twenty-one shots. Then, HM the King delivered the following keynote speech:

“In the name of Allah, the Most Merciful, the Most Compassionate

“Praise be to Allah, and prayers and peace be upon the Messenger of Allah, Prophet Mohammed, his family and all his companions,

“Your Highnesses and Excellencies,

“Peace and Allah’s mercy and blessings be upon you

“We extend our warmest welcome to you, and we are pleased to present our sincere congratulations to everyone on our glorious National Days.

“We pray to Allah the Almighty to bless our Bahraini extended family with further prosperity, tranquility and progress under the banner of the national state whose Arab and Islamic identity was constituted more than two centuries ago and whose eras throughout the ages were filled with civilized construction and human progress.

“They were based on building bridges of peace and establishing security and stability, which preserved the best traits of our character, without prejudice to the historical and well-established legal rights of our deep-rooted kingdom.

“On this auspicious day, we, the state and the people, are proud to stand together, as we bear the responsibilities of action and production, fidelity and loyalty, responsibility and public service, cooperation and solidarity, in order to fulfill the rights of our beloved Bahrain and honor the duty of serving it.

“We are gratified this year, as we move forward within the spirit of reinvigorating the One Bahrain Team, to dedicate this auspicious ceremony to celebrate the performance and generous efforts of our Bahraini citizens on the front lines, and to confer upon them the “Prince Salman bin Hamad Medal for Medical Merit” in recognition of their distinguished services and outstanding contributions to confronting the pandemic with its critical health emergencies.

“They are the first batch among our remarkable Bahraini citizens, and there are many whom we will be keen to honour on upcoming occasions.

“We here address them with great appreciation and pride in their generous efforts and their honorable stances, and in the tremendous efforts and the sacrifices they have made to help the nation reach safe shores.

“We should, at the forefront of this honour, express to His Royal Highness, the loyal Crown Prince and Prime Minister, our deep gratitude for his great efforts throughout this critical period, during which he was keen to follow up on all matters, with remarkable composure and wisdom.

“We thank him for all that and we congratulate him on the outstanding outcomes, and on his proactive views at all times.
“In conclusion, we congratulate all of you for the brilliant performance, and we reiterate our thanks for the full solidarity for the sake of Bahrain in such exceptional times that swept the world.

“We express to everyone our appreciation and pride in the sincere sentiments we have received, and in the support and loyalty on this auspicious occasion.

“May Bahrain and its  dear people, on this special occasion and on the many more to come, remain in a good state, safe and secure.

“Peace and Allah’s mercy and blessings be on you.”

After that, HM the King bestowed the “Prince Salman bin Hamad Medal for Medical Merit” upon the honourees.

Then, Undersecretary for Research and Projects at the Prime Minister’s Office and Head of the Operation Room to Combat COVOD-19, Hamad Yacoub Al Mahameed, delivered a statement on behalf of the honourees in which he expressed deepest pride in HM the King’s patronage of the auspicious National Days, and honouring of national work pioneers.

He asserted that the annual honouring of the distinguished national work pioneers is a catalyst for them to be more dedicated in serving the nation and raising its flags at all international gatherings so that Bahrain always remains at the top across various fields.

Hamad Yacoub Al Mahameed conveyed to HM King Hamad the pride of the members of Team Bahrain, who are at the front lines of the fight against the pandemic, noting that they always draw inspiration from HM the King’s strong will and determination.

He underlined the frontliners’ honour to be essential partners in the national efforts, led by HRH the Crown Prince and Prime Minister, to defeat challenges and bring about more successes to kingdom in combating COVID-19, pledging that they will make all sacrifices for the sake of the cherished homeland, under HM the King’s wise leadership.

He also extended, on behalf of all the honourees, heartfelt thanks and gratitude to HM the King for the honouring, as well as deepest congratulations on the kingdom’s glorious National Days.