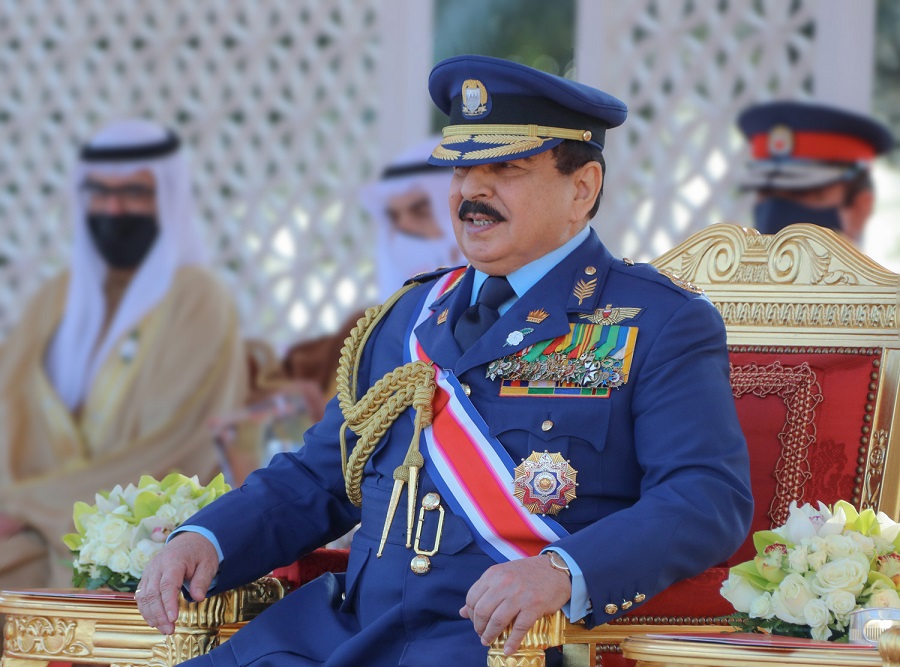 Then, HM the King headed to the main platform, and the National Anthem was played on the occasion of the Commemoration Day.

Some verses of the Holy Quran were recited, the artillery fired one shot, a minute of silence was observed and a second artillery shot was then fired.

After that, a squadron of fighter jets from the Royal Bahraini Air Force (RBAF) conducted a flypast in tribute to the fallen servicemen. Then, HM the King inspected the guard of honour, whose members lined up to salute him. Then, a musical band played the “Last Return” melody.

Court of Cassation’s Sharia Department Chairman and Al-Fateh Mosque Imam, Shaikh Adnan bin Abdulla Al-Qattan, delivered a speech paying homage to the martyrs of duty, and praying mercy for them.

He paid tribute to HM King Hamad for patronising the Commemoration Day, in tribute to the martyrs of duty.

After that, Royal Protocols Chief prayed for the souls of fallen servicemen, and watered the palm tree, which is the symbol of eternal life.

Finally, the National Anthem was played, signally the conclusion of the commemorative event.

On the occasion, HM the King, the Supreme Commander, made a statement in which he expressed pride in marking the Commemoration Day in recognition of the contributions of the martyrs of duty since the establishment of the modern state in Bahrain, noting that they had embodied the best values of bravery and redemption, setting themselves as role models for the coming generations for patriotism.

HM the King asserted that December 17 is an annual national occasion to commemorate the sacrifices of the brave Bahraini servicemen who lost their lives in Bahrain or abroad while defending the values of right and justice, safeguarding the national security and sovereignty and fighting terrorism, in line with the precepts of the Islamic religion and the deep-rooted national values.

HM the King, the Supreme Commander, saluted the members of the brave armed forces and security institutions for their unwavering keenness to undertake their sacred national duties in defending the homeland and its people with courage and valour.

HM King Hamad affirmed that every fallen serviceman is a national hero, who is a source of pride for his brethren of arms, noting that their heroic actions will always remain engraved in the national memory.

HM the King noted that the families of the martyrs are as brave as the fallen servicemen, citing their patriotism, and keenness to instill the love of the nation in the minds and hearts of their sons.

HM the King paid tribute to the citizens for their noble stances, cohesion and keenness to support the families of the late servicemen, proving that every martyr is the son of every Bahraini in the one-family Bahraini society.