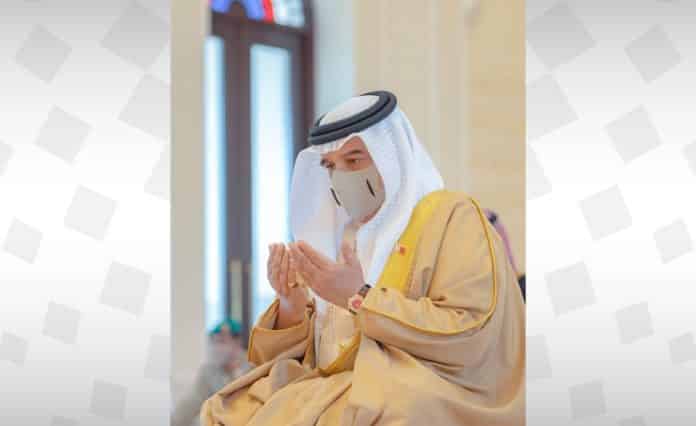 His Majesty King Hamad bin Isa Al Khalifa performed today Friday prayer at the Sakhir Palace mosque, alongside members of the royal family after issuing his noble directives to re-open a number of mosques for Friday prayer during the holy month of Ramadan.

HM the King and the audience listened to Friday sermon which was delivered by the Sunni Endowment Council Chairman, Dr. Rashid bin Mohammed Al Hajeri who spoke about the benefits of the holy month of Ramadan, praying to Allah Almighty to protect HM the King and bless him with every success in serving the kingdom.

Dr. Al Hajeri wished HM the King continued good health and happiness and further growth and prosperity to the Kingdom of Bahrain and its people. He expressed thanks to HM the King for his noble directives to re-open a number of mosques for Friday prayer during the holy month of Ramadan. He also extended thanks to His Royal Highness Prince Salman bin Hamad Al Khalifa, the Crown Prince and Prime Minister, and Bahrain taskforce for their noble humanitarian efforts in combating the coronavirus pandemic and protecting the health and safety of all citizens and residents.

Dr. Al Hajeri wished Bahrain ever-lasting security, stability and prosperity under the leadership of HM the King, praying to Allah Almighty to protect the kingdom, the Muslim nation and the whole world from all pandemics and diseases.