INFINITI Bahrain is proud to announce an...

So what is the importance of AI...
In focusSpotlightHM King praises Bahrain’s development strides 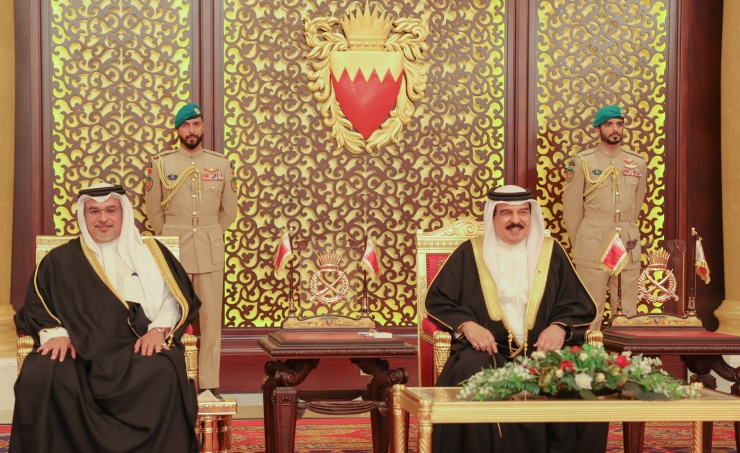 They congratulated HM the King on the advent of the Holy Month of Ramadan, wishing him good health, happiness and long life and the Kingdom of Bahrain and its loyal people further security, stability, progress and prosperity under his wise leadership.

HM the King exchanged congratulations with them and thanked them for their noble feelings, wishing the Kingdom of Bahrain and its loyal people further progress and prosperity.

He praised HRH the Crown Prince and Prime Minister’s dedicated efforts to further national development, progress and prosperity, lauding his leadership of Team Bahrain during the pandemic which enabled the kingdom to confront all challenges with a one-team spirit.

HM the King said that the health situation in Bahrain today is stable and is witnessing remarkable progress in this field, lauding all medical staff and supporting bodies for their good efforts over the past period.

He praised the sincere efforts of the Shura Chairman  Speaker, lawmakers  in serving the country and citizens, consolidating the foundations of the democratic process, defending the nation’s supreme interests and working to achieve the aspirations of citizens.

He lauded the dedicated work of the heads of judicial bodies in the service and development of the Bahraini judiciary to achieve justice and preserve rights and freedoms and enhance community security and stability.

He expressed his appreciation for the important role played by the SCIA President and members in serving true Islam, spreading its tolerant teachings and raising awareness of its principles based on moderation and moderation, rejecting extremism and fanaticism, and calling for adherence to virtuous morals and promoting the values of brotherhood, solidarity, compassion and cooperation among all.

He also commended the efforts of the National Audit Office President and cadres,noting  their outstanding performance and the achievements they have made in the context of preserving public money.

He highlighted the efforts exerted by the Sunni and Ja`fari Endowments Councils in taking care of the affairs of places of worship, forming imams and preachers to spread a culture of tolerance, coexistence and brotherhood, and directing religious discourse to enhance the values of unity and national belonging.

“The executive, legislative and judicial branches represent the solid foundations for the process of development and modernization that the Bahrain is witnessing in all fields”, he said, adding that their through their cooperation and the efforts of the people of Bahrain are a motive for more cooperation and solidarity.

HM the King praised the level of constructive cooperation and fruitful coordination between the executive and legislative branches of governments, in order to achieve the goals of the comprehensive development process.

He commended the efforts and contributions of the loyal people of Bahrain in the march of national development and progress, hailing their dedication to to serve their country, raise its standing and enhance its standing among nations and peoples.

“Bahrain has a long history as a homeland that embraces everyone and believes in communication and spreading the values of love and peace, which are the well-known customs of the people of Bahrain throughout history”, he said.

He said that Bahrain  has good relations with all countries of the world, based on its policy stemming from the values of its people, adding that the Kingdom Bahrain is moving steadily towards further development and progress through the solidarity of its people and their benevolent endeavors to build on the achievements and gains made across all fields.