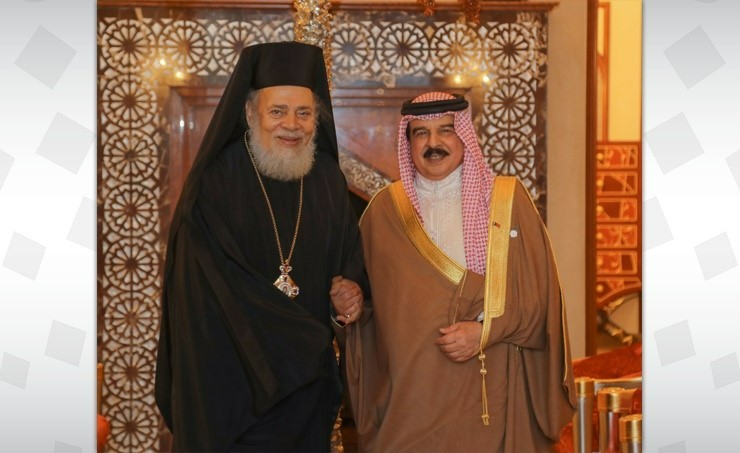 His Majesty King Hamad bin Isa Al Khalifa received, at the Al-Safriya Palace, the representative of the Greek Orthodox Patriarchate of Antioch and All the East to the Patriarchate of Moscow and All Russia, Archbishop Niphon Seikaly, marking his visit to the kingdom.

HM the King welcomed Archbishop Niphon Seikaly, and commended his good efforts to promote the values of goodness, love and tolerance.

HM King Hamad expressed pride in the kingdom’s long history of fraternity and co-existence, noting that it is a land that embraces various religions and sects that live as one loving and interconnected family thanks to the awareness of the Bahraini people and their adherence to the noble humanitarian principles based on respect for all.

HM the King reviewed with Archbishop Niphon Seikaly a number of issues that contribute to spreading the culture of dialogue and religious tolerance among followers of monotheistic religions, adherence to the approach of moderation and rejection of extremism and fanaticism.

Archbishop Niphon Seikaly expressed his thanks and appreciation to HM King Hamad for the appreciation and care that religions enjoy in the Kingdom of Bahrain without discrimination, praising Bahrain’s pioneering efforts in spreading the values of peace, coexistence and love among different peoples.