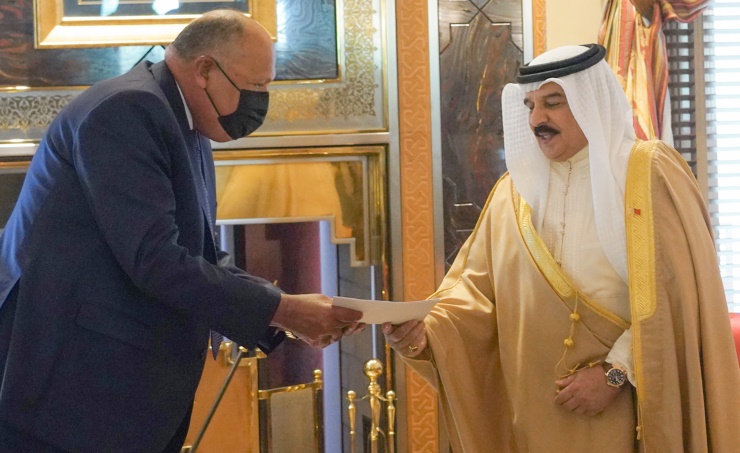 HM the King welcomed the kind invitation, and expressed his pleasure to visit Egypt as soon as possible.

The letter also focused on the solid fraternal bilateral relations, as well the latest regional and global developments, in addition to issues of mutual interest.

HM King Hamad was handed over the letter by Egypt’s Foreign Affairs Minister, Sameh Shoukry, whom he received at the Al-Safriya Palace today.

Minister Shoukry also conveyed to HM the King greetings and appreciation from President Al-Sisi, as well his wishes of continued progress and prosperity to the People of Bahrain.

HM King Hamad requested the minister to convey his greetings to President Al-Sisi, as well as his wishes of further progress and prosperity to the dear Egyptian people.

HM the King welcomed the Egyptian Foreign Minister, and expressed pride in the deep-rooted fraternal relations between the two countries, affirming that he always looks forward to broadening bilateral ties to meet the aspirations of the two brotherly countries.

HM King Hamad highlighted the importance of such visits in supporting cooperation, coordination and consultations between the two countries vis-à-vis various regional challenges and crises that jeopardize brotherly countries’ security and stability.

HM the King lauded the comprehensive development march currently witnessed by Egypt, under President Al-Sisi’s leadership, which, HM said, is a source of pride for all Arab peoples.

HM King Hamad affirmed the kingdom’s solidarity with Egypt in everything that would preserve its water rights and security, expressing Bahrain’s support for all efforts and endeavours aimed at reaching a binding agreement to resolve the issue of the Renaissance Dam in accordance with the rules of international law, in a manner that would benefit all parties, and guarantee Egypt’s rights in its water share from the Nile River.

HM the King also praised the central role played by brotherly Egypt, under the leadership of President Abdel Fattah Al-Sisi, in defending the Arab Nation’s issues and interests, protecting Arab national security and strengthening the foundations of peace, security and stability in the Middle East.

HM the King also stressed that Egypt’s security is a fundamental pillar of Arab national security.

He praised the authentic and honourable stances of Bahrain, under HM King Hamad’s leadership, towards Egypt and its people, hailing Bahrain’s important role in supporting joint Arab action.