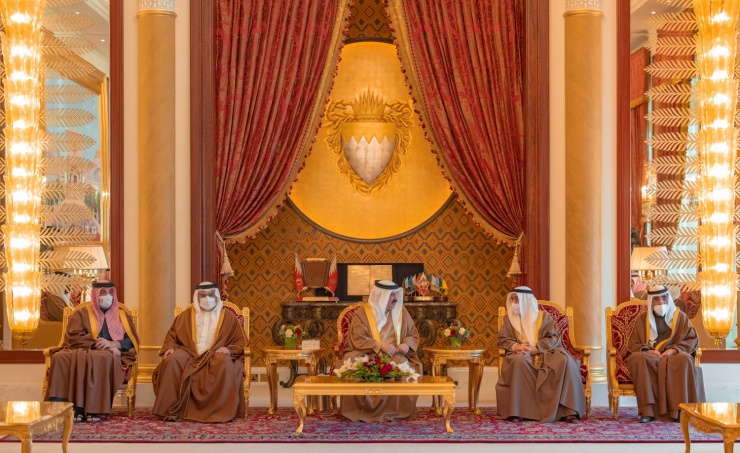 The meeting was held in the presence of His Royal Highness Prince Salman bin Hamad Al Khalifa, the Crown Prince and Prime Minister.

They extended sincere congratulations to HM the King on NAC anniversary, taking pride in the kingdom’s achievements brought about under the leadership of HM the King.

The Royal Family Council members commended the great efforts of HM the King to bolster Bahrain’s relations with the brotherly and friendly countries, consolidate its honorable stances in various international gatherings and boost its pioneering role on the Arab and international scenes. They wished HM abundant health and happiness and a long life to continue leading the kingdom’s march of development and prosperity.

HM the King also received at Al-Sakhir Palace today, in the presence of HRH the Crown Prince and Prime Minister, Speaker of the Representatives Council Fawzia bint Abdullah Zainal, Shura Council Chairman Ali bin Saleh Al Saleh, and their Deputies. They extended heartfelt congratulations to HM the King on the 21st anniversary of the National Action Charter, commending HM’s wise leadership and the kingdom’s achievements brought about in his prosperous era.

The Representatives Council Speaker and the Shura Council Chairman lauded the unlimited royal support to the legislative branch, pointing out the numerous accomplishments made in terms of developing the legislative system, achieving citizens’ aspirations, promoting the democratic approach and building on the national gains.

They extended to HM the King most sincere congratulations on the 21st anniversary of NAC, wishing him abundant health and happiness to continue leading the kingdom’s development march.

HM the King affirmed that the approval of the National Action Charter with a sweeping majority of the votes constituted a promising beginning of the comprehensive modernisation march of the kingdom’s institutions and its constitutional authorities. He praised the honorable stance of the Bahraini people which embodied the inherent Bahraini identity and keenness on development.

His Majesty added that the principles of the charter, with their renewed spirit and promising vision, will continue to motivate the people of Bahrain towards more construction, strengthening the role of the legislative institutions and opening wider horizons for popular participation in accordance with the developed democratic approach.

HM pointed out that the belief in the need to build on the achievements is the successful way to consolidate the foundations of the civil state on the basis of justice and equality. HM stressed that the kingdom will always work to promote the values of moderation, tolerance and coexistence, in the face of extremism and intolerance. HM added Bahrain will always consolidate the foundations of political work based on the principles of the Charter and the Constitution as well as respect for the rule of law and the independence of the national decision. HM noted that Bahrain will remain an oasis of goodness, love and peace.

Concerning global developments, HM the King asserted that Bahrain has chosen peace as an approach and dialogue as a strategic option to achieve peace, stability and prosperity.

His Majesty praised the achievements of the legislative branch in developing laws and legislation, commending cooperation with the executive branch to promote national prosperity. He lauded the dedicated efforts of the Bahraini people in serving the nation, praising their good morals and cohesion.

HM the King commended the young competencies and their contributions to serving Bahrain, praising the inherent values of tolerance, coexistence and pluralism which have ever characterised the Bahraini society. He also lauded the efforts of the armed forces and the security bodies, describing them as the bulwark and pride of the nation.