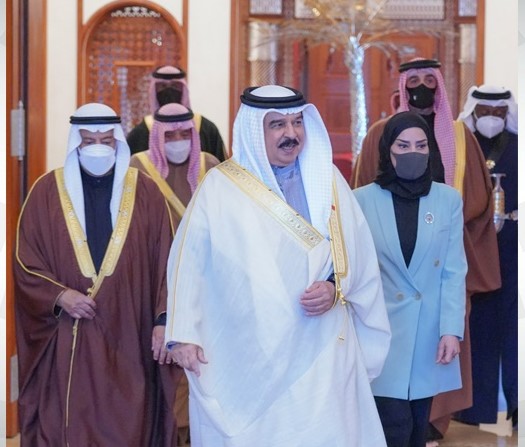 HM the King was speaking as he received at Safriya Palace today Speaker of the Representatives Council, Fawzia bint Abdullah Zainal, Shura Council Chairman Ali bin Saleh Al Saleh and their Deputies, who submitted to HM the councils’ response to the royal speech given in the inaugural ceremony of the fourth session of the fifth legislative term.

HM the King expressed thanks and appreciation for the efforts made by the Shura and Representatives Councils to promote the national development process, defend the nation’s supreme interests and develop the law and legislation system to cater to citizens’ needs and aspirations.

HM the King praised the constructive ideas included in the councils’ response which aim to boost the democratic march, hailing continuous cooperation between the executive and legislative branches to serve the nation and citizens. He also lauded the achievements brought about by the Bahraini competencies, stressing the kingdom’s resolve to continue the march of growth and development.

HM the King praised the noble characteristics of the Bahraini people, their keenness to advance their country and their solidarity in all circumstances. He described them as the real asset of the nation, affirming that those noble attributes are being passed down from generation to generation.