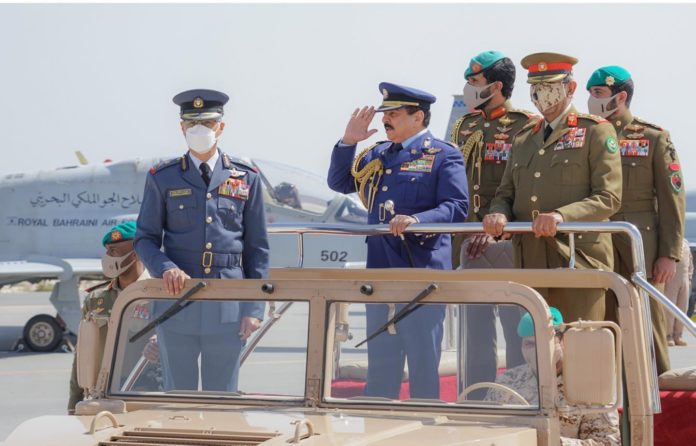 In a speech delivered on the occasion, the RBAF Commander, Air Vice-Marshal Shaikh Hamad bin Abdullah Al Khalifa paid tribute to HM the King for visiting Isa Air Base marking the 54th anniversary of BDF. He praised the BDF achievements and development brought about thanks to the directives of HM the King. He expressed, on behalf of RBAF affiliates, thanks and gratitude to HM the King for the visit to inaugurate a number of systems that have recently entered service in the air force and to inaugurate the aviation systems whose combat capabilities have been developed.

The RBAF Commander expressed most sincere thanks and gratitude to HM the King for his continuous keenness to modernize the air force, pointing out the provision of the three cutting edge and most efficient systems which have been contracted to obtain and will start arriving in the kingdom successively: the helicopter system (the Shield of Bahrain Project), the air defence system (the Spears of Bahrain Project), and the jetfighters system (the Hamad Hawks Project).

The BDF Commander-in-Chief presented HM the King with a commemorative gift marking the national occasion.

HM the King congratulated the RBAF personnel on the national occasion, praising the efforts of the BDF affiliates to protect the kingdom’s achievements and citizens’ security. He commended contributions of the RBAF personnel to promoting security and peace in the region, under the umbrella of the United Nations and in collaboration with brotherly and friendly countries.

HM affirmed keenness on continuous development of the RBAF aviation system by supplying it with the latest weaponry and equipment.

HM the King, the Supreme Commander, received congratulations on the 54th anniversary of BDF.