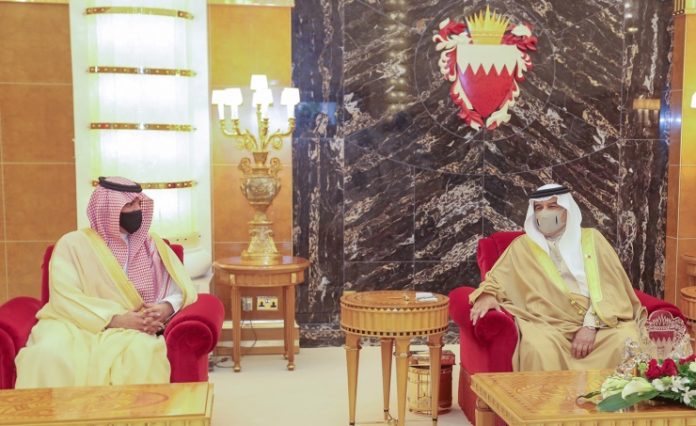 His Majesty King Hamad bin Isa Al Khalifa took pride in the deep-rooted historic and fraternal relations binding the Kingdom of Bahrain and the Kingdom of Saudi Arabia, as well their leaders and brotherly peoples.

He commended the honourable Saudi stances, led by the Custodian of the Two Holy Mosques, in support of the Kingdom of Bahrain, embodying solid historic ties, which are based on fraternity and solidarity between the two brotherly countries and peoples.

The Saudi minister congratulated HM the King on the holy month of Ramadan, wishing HM the King, the Kingdom of Bahrain and its people many happy returns.

HM the King welcomed the Saudi minister, extending his greetings to   the Custodian of the Two Holy Mosques and HRH the Crown Prince.  He wished the brotherly Saudi people further progress and prosperity, stressing the importance of such brotherly visits in strengthening joint cooperation and coordination between the two countries.

HM the King hailed the dedicated efforts  of the Custodian of the Two Holy Mosques to further bolster joint Bahraini-Saudi relations, commending the pioneering Saudi role to strengthen the pillars of security, stability and peace in the region and protect the interests of its countries and peoples.

HM the King and the Saudi Minister of Interior reviewed the current   developments unfolding in the region, in addition to issues of common interest.