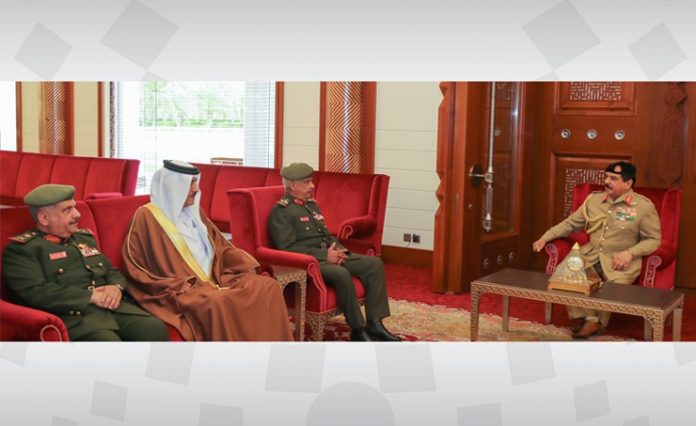 They congratulated HM the King on the holy month of Ramadan, praying to Allah the Almighty to bless him with good health and happiness and the Kingdom of Bahrain and its loyal people with further progress and prosperity.

HM the King exchanged Ramadan greetings, wishing all many happy returns. He lauded the efforts exerted by the National Guard Chief, which contributed to enhancing this military milestone’s readiness.

He commended the National Guard’s servicemen, hailing their solidarity and joint work with the Bahrain Defence Force, the Ministry of Interior and the National Security Agency to fulfill their duties in defending the nation and protecting its security, stability and achievements.

HM the King praised the advanced level attained by the National Guard’s units, regarding training, combat readiness and preparadness to anwser the call of duty, wishing servicemen success in serving the nation.

HM the King hailed the dedicated efforts exerted by the National Security Agency chief and all its affiliates in serving the nation and protecting its security, stability and achievements on all levels. He took pride in Bahrainis’ cohesion, fraternity, solidarity, awareness and collective responsibility in serving the nation.

The Ministry of Health has held more training sessions and workshops that targeted health workers and professionals, including doctors, nurses, support services, and other...
Read more
Inside Bahrain

Bahraini trucks and their drivers will be allowed to resume their trips to the Kingdom of Saudi Arabia via the King Fahd Causeway today,...
Spotlight

Planning a virtual event? Need to reach government officials in specific directorates? The Government Directory App is your essential guide to the numerous governmental...
Tech

Netflix is letting people choose the speed at which they want to watch something on their phone or tablet with new playback controls. Netflix will...
© GO ALIVE MEDIA
MORE STORIES