The Ritz-Carlton, Bahrain is rolling out the red...
CultureInside BahrainHM the King holds remote meeting with Brazilian president 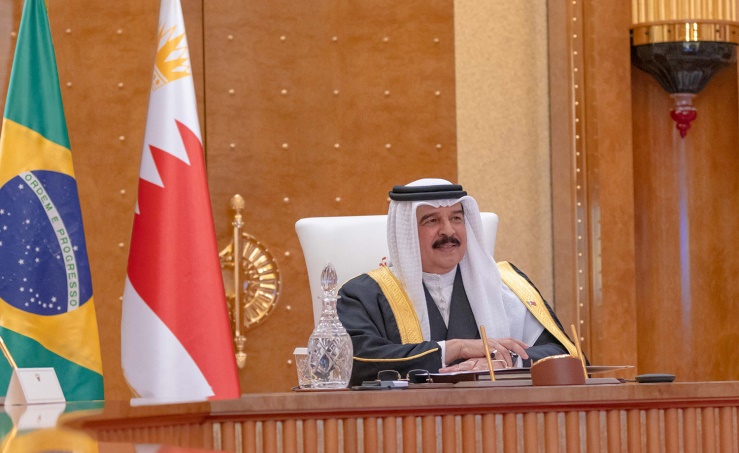 “We look forward to welcoming a Brazilian delegation at the 4th session of political consultations which will be held in Manama in 2021”, said HM the King.

He thanked President Bolsonaro for taking part in the ceremony which was held in Brazil to launch the Bahrain Declaration in South America.

“As you know, this declaration seeks to promote peace between nations and advocate coexistence between peoples of different religions and beliefs, on the basis of the values of mutual respect to achieve peace”, said HM the King.

“The Kingdom of Bahrain shares your interest in consolidating economic relations between the two countries, and we are keen to enhance trade and investment relations with the Republic of Brazil, as it is the largest country in South America and one of the largest economies in the world”, he added.

He stressed commitment to support projects which would held boost the volume of joint trade exchange, that stood at $902 million, consisting mainly in iron, steel and oil.

“We look forward to continuous growth in the commercial partnership between our two countries. We have directed the relevant economic authorities to discuss commercial opportunities with their counterparts in Brazil”, he said.

HM the King said that Brazilian trade delegation to Bahrain would provide a propitious occasion to explore investment opportunities.

He commended President Bolsonaro’s efforts to combat COVID-19 pandemic which took a devastating toll on the global economy.

“We are convinced that boosting the volume of trade exchange between us will help support a strong economic recovery”, he said, adding that Bahrain is looking forward to the opening of the Brazilian Embassy in Manama.

HM the King said that he had directed competent authorities to expedite the operation, to reflect strong diplomatic relations between the two countries.

He announced that Bahrain would soon appoint an ambassador to Brazil, looking forward to the official opening of Bahrain’s embassy in Brasilia as soon as possible.

He welcomed the signing of a joint defence cooperation agreement to consolidate consultation across all fields of common concern.

He noted the participation Brazilian Navy servicemen in the coalition forces based in the Kingdom of Bahrain, extending an invitation to President Bolsonaro to visit Bahrain, adding that he would be received warmly in view of the appreciation that Brazil and its people enjoy from the people of Bahrain.

President Bolsonaro also congratulated HM the King on the signing of the Abraham Accords with the State of Israel, which represents a message of peace from HM the King to the world.

He underscored the importance of strengthening political, economic, industrial and agricultural relations and developing ties in the sector of food security.

President Bolsonaro said that his country would send delegations to the Kingdom of Bahrain to discuss ways of consolidating cooperation across all fields.

He said that he is looking forward to meeting HM the King soon, wishing such meetings to continue. He also extended thanks to HM the King for inviting him to visit Bahrain, wishing the Kingdom and its people further progress and prosperity.