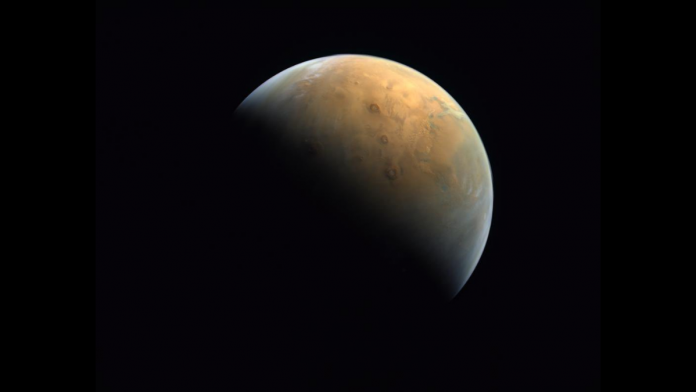 The Hope Probe mission hopes to provide the most complete picture of the Martian atmosphere yet. It’s suite of instruments include EXI and both an ultraviolet and infrared spectrometer. The picture at the top of this page was captured by Hope’s EXI instrument from above the Martian surface.

Shaikh Mohamed bin Zayed Al Nahyan shares the first image of Mars sent by the Hope Probe. The photo was captioned with:

“The transmission of the Hope Probe’s first image of Mars is a defining moment in our history and marks the UAE joining advanced nations involved in space exploration. We hope this mission will lead to new discoveries about Mars which will benefit humanity.”

The north pole of Mars is in the upper left of the image. At centre, just emerging into the early morning sunlight, is Olympus Mons, the largest volcano in the Solar System. The three shield volcanoes in a line are Ascraeus Mons, Pavonis Mons, and Arsia Mons. Look east and you can see the mighty canyon system, Valles Marineris.

The spacecraft entered into an orbit around the Red Planet on Tuesday, making the UAE the first Arab nation in history to have a scientific presence at Earth’s near neighbour. Many similar views and photos are expected to come throughout the Hope Probe’s mission.