Under the patronage of the Honorary President...
NewsHRH the Crown Prince and Prime Minister attends COP27 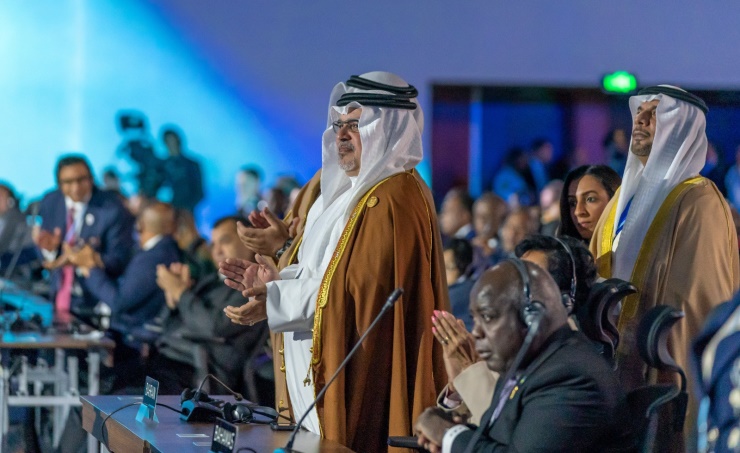 Upon his arrival at the conference, HRH the Crown Prince and Prime Minister was welcomed by the President of the Arab Republic of Egypt, HE Abdel Fattah El-Sisi.

HRH the Crown Prince and Prime Minister noted the role of innovation and technology in developing new and impactful green solutions which will benefit current and future generations.

His Royal Highness commended Egypt for hosting the high-profile global event, which provides an opportunity for countries to share new thinking and reaffirm their commitment to global climate goals.

HRH Prince Salman bin Hamad noted the Kingdom’s commitment to achieving carbon neutrality by 2060 and emphasised that the Kingdom is making significant progress toward its 2035 goals set at the Glasgow Conference in the United Kingdom (COP26).

HRH Prince Salman bin Hamad noted that the Kingdom has introduced various policies and programs to help it reach its climate goals. This includes investing in carbon technologies and the National Afforestation Plan, which will double the number of trees in the Kingdom of Bahrain and quadruple mangrove coverage. The Kingdom planted 140,000 trees, exceeding its annual target, and met its annual goal to expand mangrove coverage.

HRH Prince Salman highlighted that the Kingdom aims to reduce emissions by 30% through investing in decarbonisation and energy efficiency initiatives and by doubling renewable energy, noting that Bahrain was able to increase its renewable energy sources by 40% in the past year.

In this regard, HRH the Crown Prince and Prime Minister referenced the Kingdom’s commitment to developing advanced carbon capture, usage, and storage solutions.

His Royal Highness concluded by reiterating his best wishes for the success of COP27, which he hopes will contribute to international cooperation on climate change and enhance global growth and prosperity.