I tried to do my homework but a...
CultureInside BahrainHRH the Crown Prince and Prime Minister chairs EDB Board Meeting 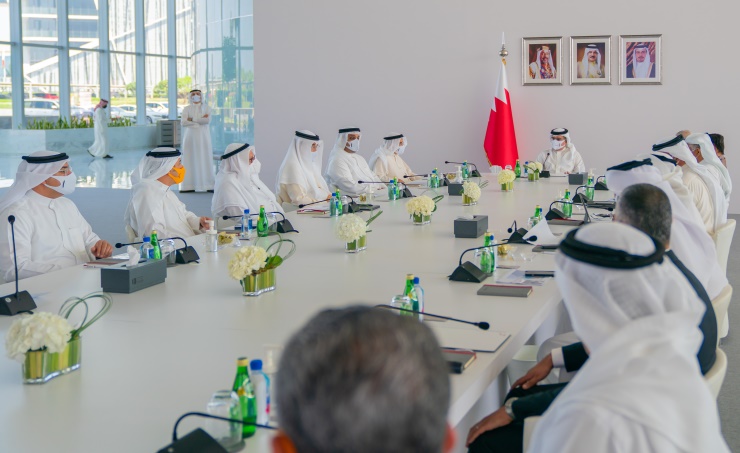 His Royal Highness Prince Salman bin Hamad Al Khalifa, the Crown Prince, Prime Minister, and Chairman of the Bahrain Economic Development Board (EDB), today chaired the EDB Board Meeting, at the EDB’s headquarters at Bahrain Bay. Economic and investment plans, as well as accomplishments despite COVID-19 challenges, were reviewed.

His Royal Highness stressed that supporting economic growth is a continuous process that aims to enhance competitiveness and economic sustainability through innovative initiatives that stimulate the growth of various sectors, in line with Bahrain’s Economic Vision 2030.

His Royal Highness expressed his gratitude to Team Bahrain, for their efforts in mitigating the repercussions presented by COVID-19.  In this regard, His Royal Highness noted the importance of continuing efforts during the phase of recovery to achieve the Kingdom’s comprehensive development goals, led by His Majesty King Hamad bin Isa Al Khalifa.

His Royal Highness stressed that the performance evaluation will be based on the extent of success in making Bahrainis the first choice of employment across the labour market and in implementing projects and initiatives to create quality opportunities for all.

His Royal Highness explained that the efforts to secure a sustainable economic recovery pales compared to the stability and opportunities it will create.

His Royal Highness expressed his pride in the results that have been achieved, which are a reflection of Team Bahrain’s determination. His Royal Highness affirmed that solidarity and a competitive spirit are required to succeed.

His Royal Highness noted that the ultimate goal of the implemented programmes is to provide economic stability and development for the benefit of our citizens. His Royal Highness re-iterated that the private sector’s contribution to the Kingdom’s development and its role as an economic driver creates opportunities by providing an open environment that supports sustainable growth.

Furthermore, His Royal Highness highlighted the EDB’s successful efforts in attracting direct investments and creating opportunities. This has led to companies launching and expanding operations in Bahrain, reflecting investor confidence in the Kingdom and its economy.

HE Khalid Humaidan, Chief Executive of the Bahrain EDB, presented the board with the latest economic indicators and the EDB’s performance, illustrating Bahrain’s position as an attractive investment destination.

Bahrain’s economy is expected to grow 3.3% in 2021, making it the fastest-growing market in the GCC (according to IMF figures) in 2021. Data from the Ministry of Finance and National Economy’s (MoFNE) Bahrain Economic Quarterly also indicated a growth rate of 5.7% in the second quarter, demonstrating that economic recovery is gaining traction.

The most recent success was Citi Group’s Technology Hub which will create 1,000 jobs for Bahraini coders over the next ten years.