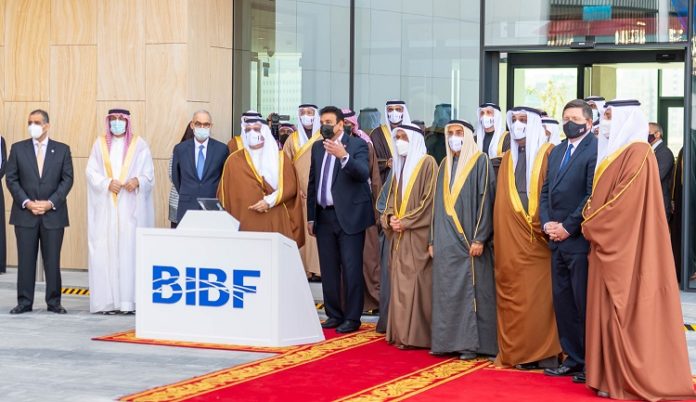 His Royal Highness emphasised that the inauguration of the new state-of-the-art BIBF headquarters will contribute to the sector’s development and benefit both the economy and Bahraini citizens.

HRH the Crown Prince and Prime Minister noted the importance of investing in the Kingdom’s workforce by providing quality opportunities and developing educational and training institution capabilities within the financial services sector. This will enhance economic performance and efficiency, in accordance with the objectives of the Economic Recovery Plan and Bahrain Economic Vision 2030.

His Royal Highness toured the 25,000 square metre building which can accommodate 1,200 trainees at any given time. The building’s facilities include: an auditorium, smart classrooms, high-tech computer labs, and the region’s first simulated dealing room. The campus’s facilities have been equipped with the latest technologies that, in tandem with updated academic and training programmes, have been developed to satisfy employer skill and experience requirements.

HRH Prince Salman bin Hamad was also briefed on The BIBF’s 40-year history, including its 600 programmes and numerous international partnerships, particularly with the The London Institute of Banking & Finance (LIBF) with whom 3 agreements have been signed. These agreements will ensure that a number of The BIBF’s programmes and services, in partnership with LIBF, are provided globally.

The Governor of the Central Bank of Bahrain and Chairman of the Board of Directors, HE Rasheed Al-Maraj, extended his thanks and appreciation on behalf of the BIBF’s Board of Directors and staff to His Royal Highness for inaugurating the Institute’s new headquarters.

HE Al-Maraj highlighted that HM the King’s Royal Directives and HRH the Crown Prince and Prime Minister’s ongoing support is foundational to The BIBF achieving its vision.

HE Al-Maraj emphasised that the BIBF’s plans and programmes have been developed in accordance with The Economic Recovery Plan 2022-2026. HE added that The BIBF’s primary function is to enhance the Kingdom’s specialised training credentials through the provision of skilled and qualified professionals for the banking and finance sector.