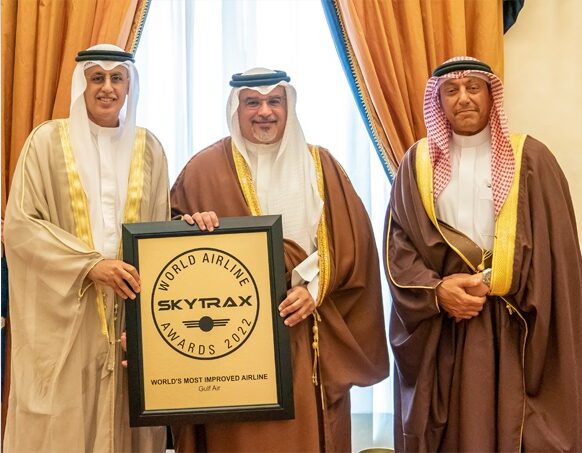 His Royal Highness Prince Salman bin Hamad Al Khalifa, the Crown Prince and Prime Minister, met with the Minister of Industry and Commerce and Chairman of the Gulf Air Board of Directors, HE Zayed bin Rashid Al Zayani, and the Acting Chief Executive Officer of Gulf Air, Captain Waleed Al Alawi, at Gudaibiya Palace.

The meeting took place to mark Gulf Air’s achievement in being awarded the World’s Most Improved Airline in 2022 by Skytrax World Aviation Awards.

His Royal Highness emphasised the importance of the logistics sector in supporting the national economy and enhancing the competitiveness of the Kingdom’s economic sectors to achieve the Kingdom’s comprehensive development goals, led by HM King Hamad bin Isa Al Khalifa.

HRH the Crown Prince and Prime Minister directed to continue enhancing Gulf Air’s performance and quality of services, corresponding with its contributions to elevating the global image of Bahrain at all levels.

His Royal Highness extended his congratulations to the Chairman and the Board of Directors of Gulf Air, as well as to the airline’s employees, on their achievement, wishing them continued success.

For their part, the Minister of Industry and Commerce and Chairman of the Board of Directors of Gulf Air and the Acting CEO of Gulf Air, expressed their gratitude to His Royal Highness for his ongoing support in developing the Kingdom’s logistics sector.