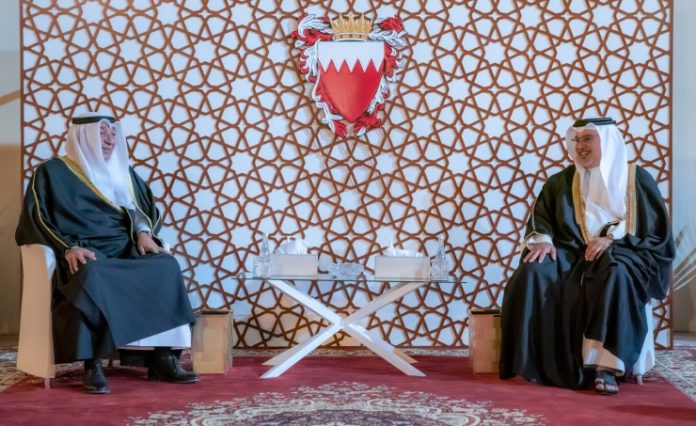 His Royal Highness Prince Salman bin Hamad Al Khalifa, the Crown Prince and Prime Minister, today received the Chairman of the Bahrain Chamber of Commerce and Industry (BCCI), HE Sameer Abdullah Nass, and members of the Board of Directors at Riffa Palace.

His Royal Highness noted the private sector’s contribution to the Kingdom’s development process, reiterating that economic sectors should contribute to the national economy and the Economic Recovery Plan’s progress, led by His Majesty King Hamad bin Isa Al Khalifa.

HRH the Crown Prince and Prime Minister highlighted the Kingdom’s positive economic indicators, which are a promising sign for the Kingdom’s future success.

His Royal Highness stressed the importance of developing the Kingdom’s public-private partnerships and strengthening the private sector’s role as a driver of the economy.

HRH the Crown Prince and Prime Minister congratulated the Chairman and members of the Chamber’s Board of Directors on their success in the recent elections and exchanged congratulations on the occasion of the holy month of Ramadan.

HRH the Crown Prince and Prime Minister also noted that cooperation is key to success and turning challenges into opportunities.

HRH Prince Salman bin Hamad commended the role of the BCCI and its committees in meeting local market needs and stabilising the prices of goods in partnership with the private sector.

The Chairman and members of the Board of Directors of the BCCI expressed their gratitude for the opportunity to meet with His Royal Highness and noted HRH’s commitment to strengthening the private sector and supporting the Chamber’s efforts.