Having an international driving license while you’re...
CultureInside BahrainHRH the Crown Prince and Prime Minister receives the Minister of State for External Affairs of the Republic of India 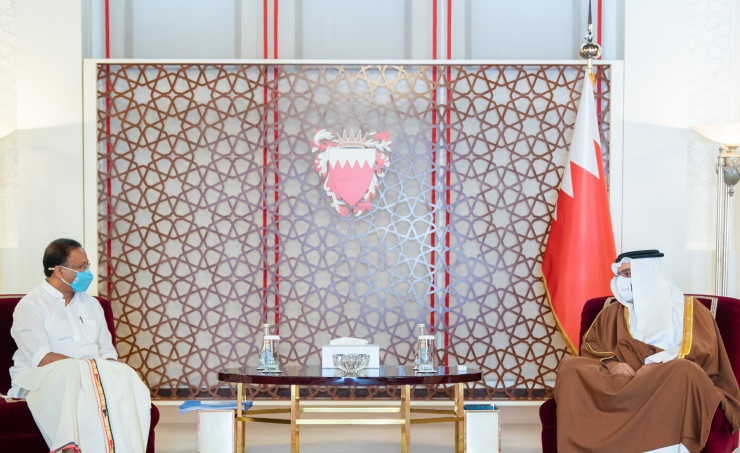 His Royal Highness Prince Salman bin Hamad Al Khalifa, the Crown Prince and Prime Minister, received the Minister of State for External Affairs of the Republic of India, His Excellency Shri V. Muraleedharan, at Riffa Palace, as part of His Excellency’s visit to the Kingdom of Bahrain.

His Royal Highness highlighted the strength of bilateral relations, particularly within economic cooperation and investment, underpinned by the historical relationship between the two countries.

His Royal Highness stressed the importance of continuing to explore further opportunities for cooperation, reflecting the vision and aspirations of His Majesty King Hamad bin Isa Al Khalifa.

His Royal Highness received the greetings of the Indian Prime Minister, His Excellency Narendra Modi conveyed by HE Shri V. Muraleedharan, and in response offered greetings to HE the Prime Minister.

His Royal Highness emphasised the importance of furthering bilateral trade and encouraging two-way investment, to achieve economic growth and prosperity for both countries.

His Royal Highness noted the cooperation and coordination between the two countries in responding to COVID-19, as well as the valuable contribution the Indian community make to Bahrain’s development, a contribution that is greatly appreciated.

Regional and international topics of common interest were reviewed, and His Royal Highness commended the role played by India alongside others in enhancing regional security and stability.

The meeting was also attended by the Minister of Foreign Affairs, HE Dr. Abdullatif bin Rashid Alzayani.