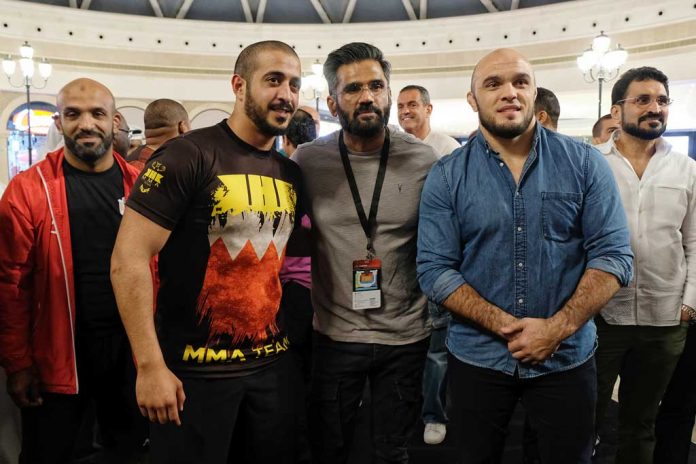 November 16, 2017
Facebook
Twitter
Pinterest
WhatsApp
Linkedin
Brave Combat Federation has announced a huge global celebrity line-up to be present at Brave 9: The Kingdom of Champions on November 17 at Khalifa Sports City Stadium. This includes former UFC champion Frankie Edgar, Illiar Latifi, John Kavanagh, Wanderlei SIlva, Suniel Shetty, Darren Till, Jeremy Kennedy, Hala Al Turk, Hanan Redha and more. The event is the largest sports media event hosted ever in the Kingdom of Bahrain and the largest in the Middle East in the domain of Combat Sports. Celebrity support was swarming to showcase support for their nations participating in the event. Brave 9: The Kingdom of Champions held public weigh-ins at the Khalifa Sports City in Bahrain. The fight night will be held at 03:30 PM on November 17 at the Khalifa Sports City featuring International athletes in the biggest fight card in Asia for the year. Three championship titles will be contested during the fight night. Global celebrities supporting their respective nationalities are present at the venue and will be present during the fight night to extend the support. Among the dignitaries who will be present will be heads of governments, sports, ambassadors
Facebook
Twitter
Pinterest
WhatsApp
Linkedin
Previous articleAlmoayyed Motors Conducts Technical Training
Next articleFair Care Dubai puts a smile on workers’ faces

All the Rotary Clubs of Bahrain organised a joint handover event on 29th June 2020 on Zoom. A handover is when the current President...
Sports This Week

Tremendous preparations are being made to launch the first-of-its-kind Brand and Design Forum in the kingdom of Bahrain. The forum, which is organized by...
Tech