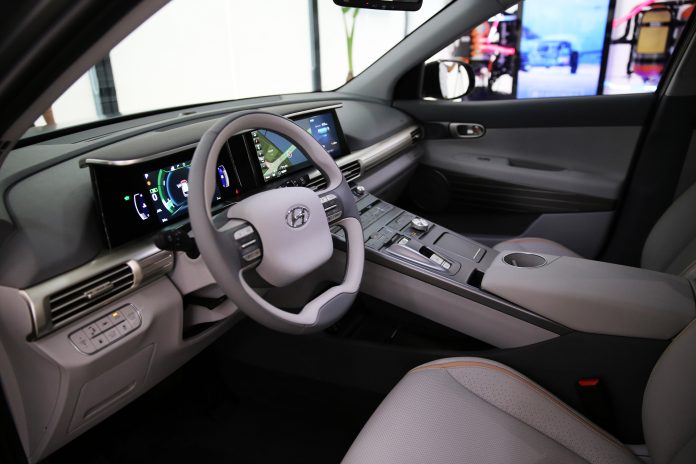 Hyundai has offered an early glimpse of its next-generation fuel cell vehicle, ahead of the hydrogen-powered SUV’s official launch early next year. The near-production-ready prototype embodies Hyundai’s commitment to a new era for advanced eco-friendly vehicle development, offering impressive capabilities and futuristic design.

The yet-to-be-named model will be Hyundai’s second commercially produced hydrogen model and uses the company’s fourth generation of hydrogen fuel cell technology. The vehicle, its capabilities and fuel cell technologies are an evolution of Hyundai’s global research, development and real-world evaluation programs, engineered with expertise honed through the world’s first commercial production of a fuel cell vehicle in 2013.

By enhancing fuel cell performance, reducing hydrogen consumption, and optimizing key components, the vehicle’s efficiency is greatly improved compared with its predecessor, the Tucson Fuel Cell. It boasts an efficiency level of 60%, or a 9% increase from the Tucson’s 55.3%, and targets a driving range of more than 580km on a single charge based on Korean testing standards. The new model’s maximum output is enhanced by 20%, boasting an impressive 163PS of power. Enhanced components – such as MEA (membrane electrode assembly) and bipolar plates – have helped to reduce production costs.

The new FCEV inherits striking design features from the FE Concept, which was introduced at the 2017 Geneva Auto Show. The new model builds on the earlier concept’s design, taking an organic and flowing form, inspired by nature – namely water, the car’s only emission – with the clean design emphasizing its non-polluting nature. The clean and simple interior layout intuitively integrates high-tech elements in an ultramodern environment, complemented by industry leading bio-materials with eco-friendly certification.

The new model will spearhead Hyundai’s plans to accelerate development of low emission vehicles, in line with Hyundai Motor Group’s renewed goal of introducing 31 eco-friendly models across both the Hyundai and Kia brands to global markets by 2020.

Hyundai is committed to a multi-pronged approach to its eco-vehicle program, with a future vehicle line-up comprising a variety of powertrain options – electric, hybrid and fuel cell – to suit customers’ varied lifestyles.

Spurred on by greater global demand for fuel-efficient, eco-friendly vehicles, the roadmap sets out the brand’s goal of leading the global popularization of hybrid vehicles, expanding its lineup to SUVs and large vehicles. It includes development of 4WD and rear-wheel drive variants, building on its proprietary Transmission-Mounted Electrical Device (TMED) system.

Continuing to develop its leadership of the electric vehicle market with its current IONIQ model, the company also aims to establish a lineup ranging from small EVs to large and luxurious Genesis-brand models. Electric vehicle development will take place in multiple phases:

Hyundai will strengthen its global leadership in hydrogen fuel cell technology through research and development to boost FCEV performance and durability, while also making the technology smaller and cheaper.

Hyundai began researching fuel cell technology in 1998. The company was the world’s first automaker to introduce a mass production line for hydrogen fuel cell cars, has supplied fuel cell vehicles since 2013, and now sells them in 18 countries around the world. Through many years of development and production, Hyundai has proved that fuel cell vehicles are as competitive as internal combustion engine cars in terms of safety and reliability.

Hyundai will reveal the new hydrogen SUV early next year in Korea, while the official name will be announced in January at the 2018 CES.