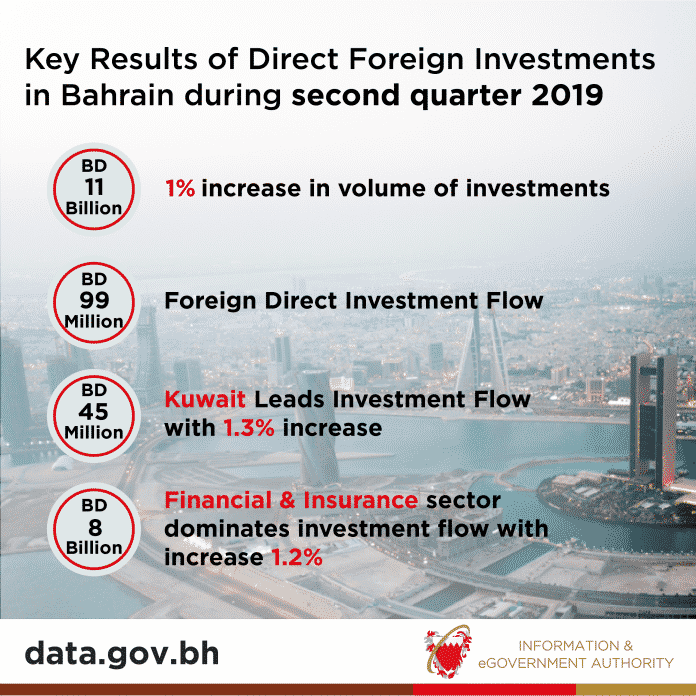 The Information & eGovernment Authority (iGA) released the initial Foreign Investment Survey results for the second quarter of 2019, conducted in collaboration with the Central Bank of Bahrain and the Economic Development Board. The survey measures the volume of foreign investments made by key entities in various economic sectors in order to provide updated statistical data of the volume and flows of these investments; in an initiative that aims to assist decision-makers set appropriate policies, which in turn will attract more investments to contribute in advancing the growth wheel across the Kingdom.

The financial and insurance activities and information and communication were the top two industries in terms of the volume of the FDI flow to Bahrain during the second quarter. The flow of financial and insurance activities FDI increased in the second quarter by 1.2% from BD7,869 million, as at the end of the first quarter of 2019, to BD7,963 million. On the other hand, the flow of information and communication FDI increased by 1% from BD338.9 million to BD342 million, over the same period.

The survey was conducted to determine the Kingdom’s foreign investment sources according to the country of residence of investors; as well as to determine the attractive sectors for investments in the Kingdom, which gives an indication of the sectors that require further development. The survey comprises active entities in all economic activities and considers the volume of capital, ownership and employment.

It is worth noting that the Foreign Investment Survey is considered one of the most important economic surveys conducted by the Authority on a regular basis in an aim to learn about the balances and flows of the foreign investments in the Kingdom of Bahrain. The survey is conducted by the Authority – represented by the Economic Statistical Directorate – in compliance with international standards and in line with the unified GCC work plan supervised by the GCC Stat Center to collect foreign investment statistics.

If you’re living in Muharraq and were looking to visit the ID Card Service Center, heads up: the center is no longer opens on...
Read more
iGA

Own a Public Transportation Business? Visit Bahrain.bh to speed up your transactions!

A smooth and efficient public transportation is an important part of any country’s infrastructure. Bahrain.bh can help companies and individuals by speeding up their...
Read more
iGA

eGoverment payment services are Rolled Out via SADAD *

In line with its commitment to provide a range of digital platforms and payment channels to the public, and streamline government transactions, the Information...
Read more
iGA

If you’re a property owner, you’ll be happy to know that the process of applying for sanitary connections is now much easier than before:...
Read more
iGA

Notarizing legal documents is an essential service offered by the government, but it can be considerably time-consuming if not done online. Like with many...
Read more

Bahrain FinTech Bay will host “OpenX 2020” an Open Banking conference held under the patronage of the Central Bank of Bahrain. The conference will...
Read more
Beauty

The Nationality, Passports and Residence Affairs (NPRA) organised an awareness campaign for expatriate communities. The Labour and Social Development Ministry and the Labour Market...
Tech

Sony Middle East & Africa has upped its flagship MASTER Series in Bahrain with the launch of the new Z9G 8K LED and A9G...
PR This Week

The Representatives Council’s Secretariat-General and the Labour Fund (Tamkeen) signed an agreement. It is to train 40 Bahrainis to work at MPs’ offices temporarily. Secretary-General...
PR This Week

Batelco, the leading digital solutions provider in the Kingdom has expanded its cloud connect solutions portfolio with the introduction of Google Cloud Interconnect. The...
Management Principles

Artificial Intelligence has been the technology story in Bahrain and round the world during 2019 and it doesn’t look like the excitement is going...
Spotlight

Bahrain’s own Isa Najem has raised the prestige of the Kingdom in the global music platform by winning the “Best Original Music Score” by...
PR This Week

Bin Hindi Motors, the exclusive distributor of KIA MOTORS in Bahrain recently unveiled the enhanced New 2020 Niro Hybrid in the Kingdom. From every angle,...
Inside Bahrain

The health care system in Bahrain has accomplished great achievements during the past decade and the government is fully committed to continue to enhance...
© GO ALIVE MEDIA
MORE STORIES