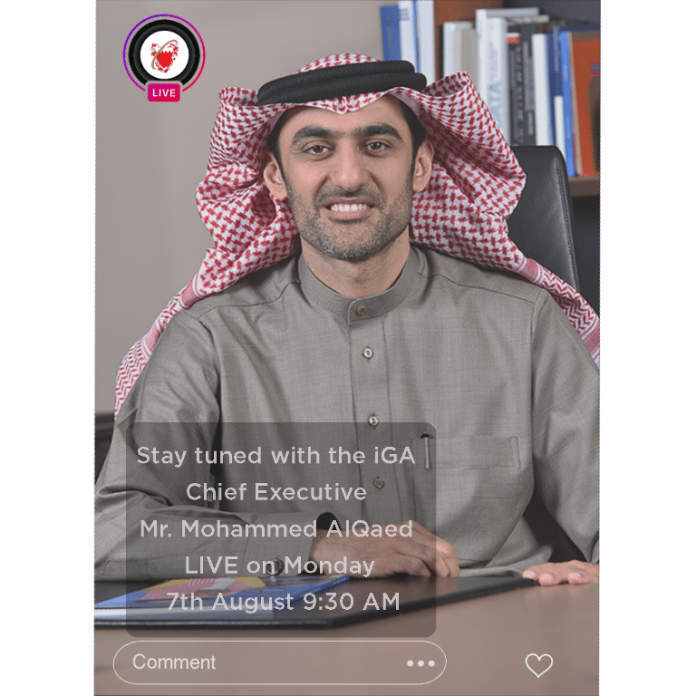 iGA Directly Communicates with the Public via InstaLive

Information & eGovernment Authority (iGA) Chief Executive Mr. Mohammed Ali AlQaed directly communicates today with followers of the authority’s social media Instagram account (@iGABahrain) via the feature InstaLive; from 9:30AM running for a period of 20 minutes. The initiative goes in line with strengthening eParticipation and direct communication between the authority and users of iGA’s services.

The CE discusses the topic ‘eServices and eTransformation Projects during 2017’ in an effort to raise awareness on the eServices provided by the authority and ease their utilization on beneficiaries. AlQaed has also presented the details of the eTransformation projects implemented by iGA in collaboration with various governmental entities within the eGovernment Program framework.

Citizens and residents can post suggestions and enquiries related to the topic by visiting iGA’s Instagram account before going live and comment under the post of the Blog to be answered during the live broadcast which will also receive participations and respond directly. Questions and answers will be archived and published at a later stage via the eGovernment Blogs page on the national portal (Bahrain.bh) to become constantly and permanently available for all who wish to benefit but was unable to follow the live broadcast.

In this regard, AlQaed stated that communicating with the public follows the authority’s keenness to directly interact with the public, taking their opinions and suggestions in consideration and adopting this new communication mechanism comes in line with the current trends of the public in utilizing the social media which has today become an arena available for everyone to share their ideas, events and updates. He further clarified that this type of participation improves the Kingdom of Bahrain’s rank in the United Nations eGovernment Survey as it reflects the direct communication amongst officials and the public in the Kingdom. He calls all government entities to initiate communication via this mechanism consistent with that constructive impact which improves citizen’s trust in the government entities, officials and delivered services.

The CE stressed that all suggestions and views are welcomed and included to study the feasibility of their implementation by indicating that this platform is considered as a mean to develop services delivered by the authority in accordance with the requirements and needs of the public as well as support of society participation in developing the government’s work in Bahrain which leads to benefits for all. Some of who include iGA, the public, concerned personals and parties together with stakeholders first and foremost. Additionally, responding and implementing the directives of our wise leadership in communicating with the public.

The Information & eGovernment Authority has launched 13 traditional blogs since 2009. A group of government officials, representing several country sectors, have participated in the blogs which are considered as one of the measuring tools to become highly ranked within the UN survey.

Zain Bahrain, a leading telecommunications provider in the Kingdom virtually hosted the 4th edition of ‘Zainnovate’ in partnership with Alkeri Partners, a Bahrain based...
Inside Bahrain

CrediMax announced its latest feature on its Loyalty program “Thameen” where cardholders are now able to redeem their points and “donate” to the Royal...
Management Principles

Several top technology companies posted increase in their revenue and profit during COVID-19, which indicates that future is with investment in technologies such as...
Sports This Week

The Bahrain Handball Association (BHA) organised a webinar which focused on local competitions for the current season. Heads and representatives of member clubs also took...
PR This Week

Malabar Gold & Diamonds, one of the largest global jewellery retailer has opened two new showrooms in India as part of its global expansion...
Spotlight