Everyone knows that Ramadan is a great...

Under the patronage of His Majesty King...
SocietyPR This WeekiGA Implements Comprehensive Plan to Improve ID Card Services 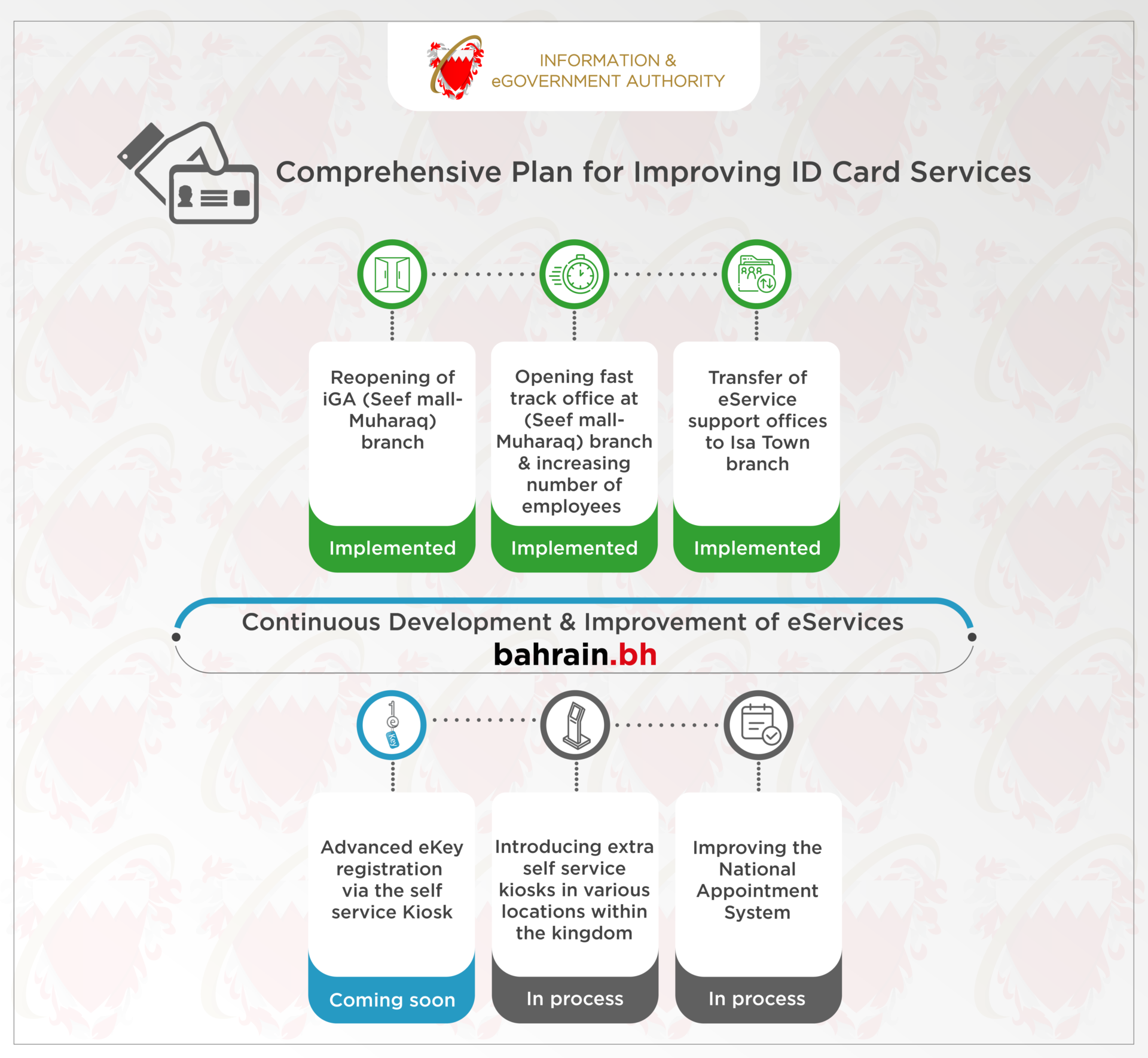 Future initiatives include increasing the number of self-service kiosks, making them available at new locations within the kingdom closer to the public, and adding Advanced eKey registration services to these machines. The kiosks, offer three types of services, ID card chip updates, registration for the Government Notifications Service, and card reading, all without the need to book appointments. From April 2020 to April 2021, more than 26,000 chip data updates were carried out via self-service kiosks.

Al Qaed stated that these improvements are in line with directives by His Royal Highness Prince Salman bin Hamad Al Khalifa, the Crown Prince and Prime Minister, to develop and simplify the services provided to the public through various channels and to address the suggestions & complaints of the public and s received through communication channels.

Customer suggestions for improvement, including feedback received via the National Suggestions and Complaints System (Tawasul), played a key role in the changes, which the iGA implemented this year. The most notable new offerings were address eServices available via the National Portal, bahrain.bh, including requests to modify home addresses, print address statements, and verify statement validity.

Al Qaed mentioned that the plan is in line with directives by the Minister of Interior, Gen. Rashid bin Abdullah Al Khalifa to streamline ID card procedures so they can be delivered effectively in the shortest time possible. Al Qaed credited HE the Minister’s support, which enabled the iGA to continue improving ID card services. It includes initiatives either based on the current service structure or by creating new packages, as well as a capacity increase to allow the iGA to handle a higher average number of monthly transactions, up from approximately 9,500 eServices pre-pandemic through to March 2020, to 19,200 as of August 2021.

Among the most notable changes was the launch of ID card services at the beginning of this year, including more than 12 eServices via the National Portal, bahrain.bh, mobile applications, and other digital channels. The iGA is working on further initiatives, recently launching a number of new ID card services such as the ability to download an ID card reader program, improving the Online Appointment System and the option to attach required documents instead of having to email them separately.

Al Qaed revealed that the number of online transactions carried out during the pandemic topped 410,000, thanks to development of technologies, programs, and card printing machines that helped it increase its capacity. This is in addition to dedicating an email address, [email protected] to ID card transactions, allowing employees to directly interact with beneficiaries. This sped up processes and eliminated the need to use the Tawasul app for these types of transactions.

The Authority is also improving service delivery times by setting timeframes for the completion of daily ID card transactions, depending on their types, ensuring that employees are able complete as many transactions as possible.

Al Qaed said that the Authority remains committed to the development and deployment of advanced technology in a range of initiatives and services, in order to meet public demands an ensure that services are processed quickly and easily. He praised the iGA’s teams for swiftly implementing the plan, adding that more eServices are due for upgrades in order to serve the widest possible customer demographic and eliminate the need to visit service centers more than once.