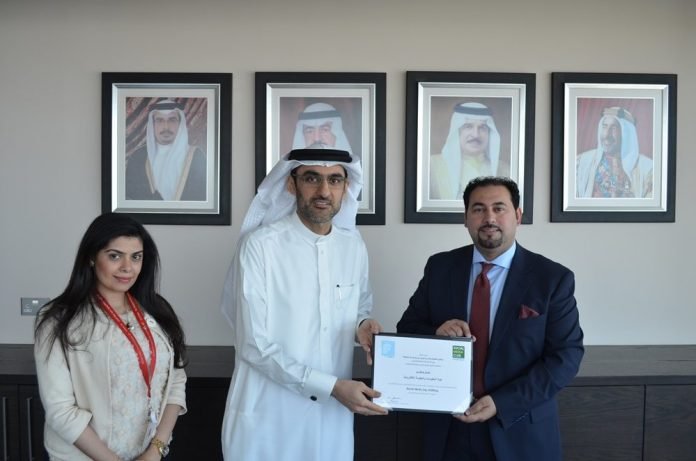 The Information & eGovernment Authority (iGA) Chief Executive Mr. Mohammed Ali AlQaed received yesterday, at his office, Mr. Ali Sabkar the Co-President of the worldwide Social Media Club. This comes on the occasion of World Social Media Day, which is held on 30th June each year.

During the meeting, Mr. Sabkar presented a certificate of appreciation to AlQaed for iGA’s efforts in supporting the social media industry in Bahrain – positioning Bahrain alongside advanced countries in this field. He also stressed the importance of the support the club is receiving by iGA which also supports the Bahraini youth in several fields.

On the other hand, AlQaed presented his sincere congratulations to Mr. Ali Ahmed Sbakar for his newly assigned position as the Co-President of the worldwide Social Media Club, founded in the United States of America. He stressed that such post is considered as an important achievement for the Kingdom of Bahrain and highlights the continuous efforts as well as initiatives by the Bahraini youth to spread the social media culture in light of the influential role in raising awareness of various issues, communication and bringing cultures as well as people closer together.

AlQaed noted that social media is considered an effective tool these a days for government entities to communicate with the citizens over different networks such as Tweeter, Facebook, Instagram, LinkedIn, blogs and others channels. He praises the efforts of Social Media Club to spread such culture, enhance communication with the community and promote the best ways to invest and use the social media.

Sudan’s Acting Foreign Minister Omar Qamar Al Din Ismail has praised the support of His Majesty the King to Sudan in various circumstances and...
Management Principles