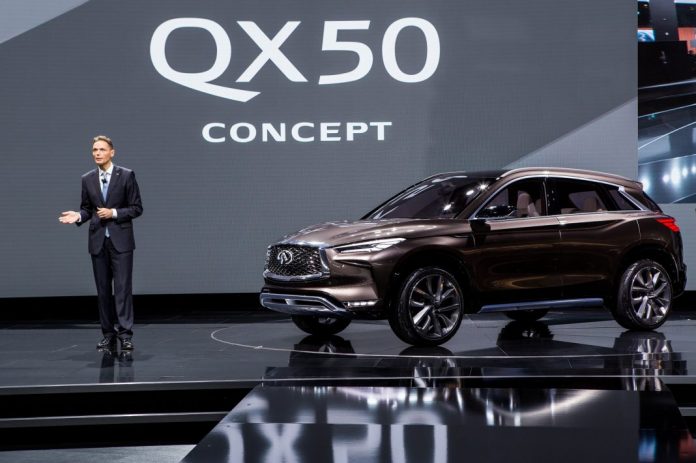 Central to the strategy for the development of all future ‘co-pilot’ systems is that they should ensure the driver retains ultimate control over their vehicle – in keeping with INFINITI’s focus on driver engagement. Empowering rather than replacing the driver, ‘co-pilot’ will act as a ‘co-pilot’ and take on the management of less rewarding driving tasks, such as ensuring safe progress in stop-start traffic on the highway or keeping track of the position of surrounding vehicles.

The ‘co-pilot’ technologies showcased at NAIAS feature on the QX50 Concept, which demonstrates how a future INFINITI premium mid-sized SUV could look and also makes its debut at the show.

Since its inception in 1989, INFINITI has brought pioneering driver-assistive technologies to the customer. The company has been responsible for a series of world-first semi-autonomous technologies, including Predictive Forward Collision Warning, drive-by-wire Direct Adaptive Steering and Active Lane Control.

Roland Krueger, President of INFINITI, commented: “INFINITI customers love to drive and our approach to autonomous driving reflects this. Equipping drivers with their very own co-pilot, the QX50 Concept lights a path to the future integration of INFINITI’s autonomous drive ‘co-pilot’ technologies, reimagining how the driver interacts with the car.”

‘co-pilot’ is designed to improve on-road safety by supporting the driver in identifying and responding to other road users and potential hazards. The technologies draw on inputs from laser scanners, radar and camera to read the road ahead and monitor the vehicle’s surroundings, and allow the car to react accordingly.

‘co-pilot’ wraps up all of INFINITI’s existing and near-future autonomous drive support technologies under one brand. The QX50 Concept’s ‘co-pilot’ system previews the first production-ready incarnation of this technology package ahead of its roll-out – and further development – in the coming years.

The Kingdom of Saudi Arabia’s leadership and people celebrated, the 90th National Day of Saudi Arabia, on September 23rd, after the historical announcement of...
Sports This Week