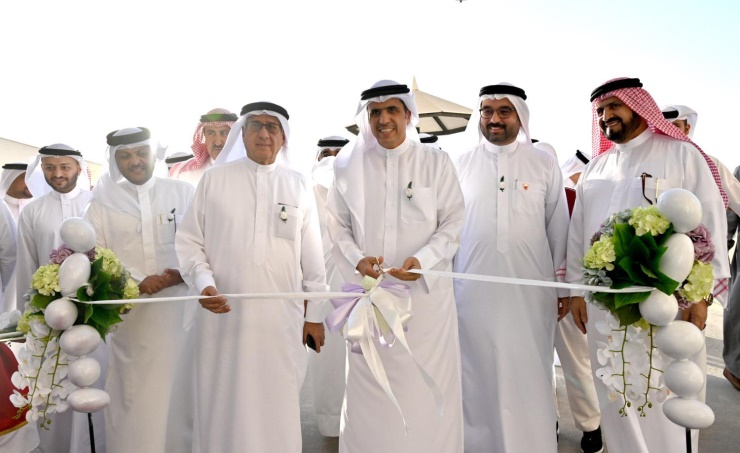 As part of the Kingdom of Bahrain’s celebration of its National Days, in commemoration of the establishment of the modern Bahraini State as an Arab and Muslim state founded by Ahmed Al Fateh in 1783, and the anniversary of His Majesty the King’s Accession to the Throne, Information Minister Ali bin Mohammed Al-Romaihi,  inaugurated the National Day Festival at the Heritage Village in the Southern Governorate.

The opening ceremony was attended by a number of Information Ministry’s officials, guests and scores of citizens and residents.

The minister and the attendees toured the village that included many events and activities, musical shows by folk bands, and a market with various shops and products.

The entertainment programmes were aimed at providing an opportunity for children to enjoy the atmosphere of the Heritage Village and its permanent architectural models that reflect the different phases of the history of Bahrain.

Al-Romaihi extended deepest congratulations to His Majesty King Hamad bin Isa Al Khalifa, and His Royal Highness Prince Salman bin Hamad Al Khalifa, the Crown Prince and Prime Minister, as well as to the Bahraini people marking the glorious National Days, praying to Allah the Almighty to bless the kingdom with security, progress and prosperity, under HM the King’s leadership.

“During the glorious National Days, we renew our allegiance and loyalty to HM King Hamad, and pledge to follow in HM’s footsteps and directives towards more giving for the sake of the nation,” the minister said.

Al-Romaihi pointed out that the Information Affairs Ministry is organising the festival to highlight the importance of the Heritage Village, which is a national monument, whose various facilities tell a part of the kingdom’s history, and its development march, noting that the Village was built upon directives from HM the King.

The minister extended thanks and appreciation to all those who contributed to the organisation of the festival in a way that reflects the festivities prevailing during the kingdom’s glorious National Days, as well as the committed public celebrations that indicate the ongoing recovery.

The minister stressed that the celebration of the kingdom’s National Days is an opportunity to recall the landmark achievements attained by the kingdom under HM King Hamad’s leadership, making Bahrain a role model in various fields, and enabling it to play a leading regional and international role, while adhering to its deep-rooted national identity principles.

The minister paid tribute to all COVID-19 fight frontliners, thanks to whose sense of patriotism and dedicated efforts, the kingdom is on the right track towards recovery.

This embodies an epic success story achieved thanks to the wise leadership and visions of HM the King, support of HRH Crown Prince and Prime Minister, as well as the full backing of the Bahraini people, he said.

The National Day Festival in the Heritage Village will run until December 20, from 4:00 to 10:00 pm every day.