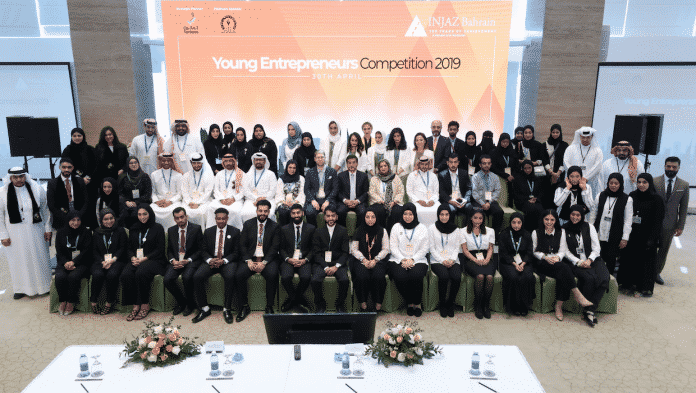 Under the patronage of Her Highness Shaikha Hessa bint Khalifa Al Khalifa, Chairperson of INJAZ Bahrain, the 11th edition of Young Entrepreneurs Competition, held at the Wyndham Grand Manama, was successfully concluded on Tuesday. The 2-day event witnessed student entrepreneurs from around the Kingdom competing to obtain the coveted “University Company of the Year” and “High School Company of the Year” titles in addition to “High School Product of the Year 2019”, “University Product of the Year 2019”, “High School Company for best Social Impact 2019” and “University Company for Best Social Impact 2019” awards.

The two-day event ran a busy agenda starting off with presentations by participating teams and both visits by judges, and ending with an award ceremony.

The 2019 Young Entrepreneurs Competition not only highlighted current achievements but reflected the success of INJAZ students throughout the year, recalling the great success and awards obtained by “CONTRIVE” from Shaikha Hessa Girls School and “TaaWin” from the Royal University for Women during INJAZ Al-Arab 2018 Young Entrepreneurs Competition.

The company program was sponsored by Tamkeen, the strategic partner of INJAZ Bahrain for this program, while the 11th edition of the Young Entrepreneurs Competition was sponsored by Bahrain National Gas (Banagas), the platinum sponsor for this year.

More than 200,000 students from across the Kingdom have benefitted from INJAZ flagship programs over the past 14 years.

The World Health Organization (WHO) has expressed appreciation of the efforts of the government led by His Royal Highness the Prime Minister to reduce...
Read more
Inside Bahrain

The Supreme Council for Women (SCW) has today started field work as part of the “Together for Bahrain's Safety" which was launched recently. Basic commodities...
Read more

AlMabarrah AlKhalifia Foundation has announced its readiness to implement “Jaser” a first-of-its-kind initiative in the Kingdom of Bahrain, which includes a “Remote Work” platform...
Sports This Week

As events across the globe have been postponed due to spread of Coronavirus (COVID – 19), BRAVE CF was also proactive in postponing their...
Entrepreneurial Journey

Our Al Adil group has always focused on delivering pure, clean and safe products to customers. Hence we have implemented state-of-the-art technology for packaging,...
Tech

Zain Bahrain, a leading telecoms operator in the Kingdom, has introduced Be Safe initiative to encourage customers to utilise all Zain digital channels to...
© GO ALIVE MEDIA
MORE STORIES