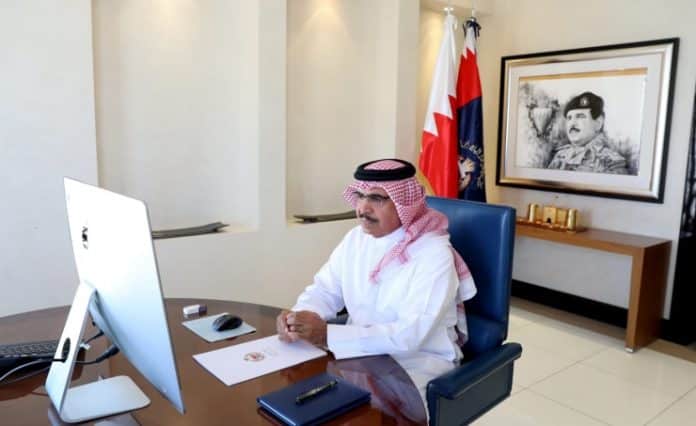 The services, launched by the Information and e-Government Authority (iGA) through its portal, Bahrain.bh, aim to reinforce precautionary measures as part of the national efforts against the coronavirus.

The Interior Minister hailed the directives of His Majesty King Hamad bin Isa al Khalifa to invest in technology in all fields to serve the nation and citizens. He also valued the support and follow up of the government, led by His Royal Highness Prime Minister Prince Khalifa bin Salman Al Khalifa, of these initiatives that are part of the directives of His Royal Highness Prince Salman bin Hamad Al Khalifa, Crown Prince, Deputy Supreme Commander and First Deputy Prime Minister.

The minister asserted that the e-services would contribute to achieving performance excellence and better services for citizens to translate the strategies and priorities of the government into achievement of sustainable development. He highlighted the importance of continuing the development and adoption of technology in various initiatives and services, as well as the importance of enhancing awareness of all segments in society to benefit from e-services that limit the needs of personal attendance at services providing centres.  He hailed the national expertise that contributed to the fast processing of the services.

Meanwhile, iGA Chief Executive, Mohammed Ali Al Qaed asserted that iGA had worked to complete the remaining services for the ID and the residential records. He said that the services would enable all segments in society to receive them with ease, without the need for their attendance at services providing centres for several times.

The Interior Minister launched eight e-services, while four other services were updated, bringing the total number of eservices to 23 comprehensive offered by iGA through its national portal, smart devices and other e-channels. These services are with great importance in the current situation.

The planned resumption of Friday prayers on June 5 has been postponed, the Ministry of Justice, Islamic Affairs and Endowments has said. The decision was...
Read more
Inside Bahrain

The National Taskforce for Combating the Coronavirus (COVID-19) today held a press conference at the Crown Prince Centre for Training and Medical Research at...
Entrepreneurial Journey

As a visionary step, Bahrain has introduced robots for the assistance of COVID-19 patients. H.E Fatima A.Wahid Al Ahmed Assistant Undersecretary for Resources and...
Spotlight