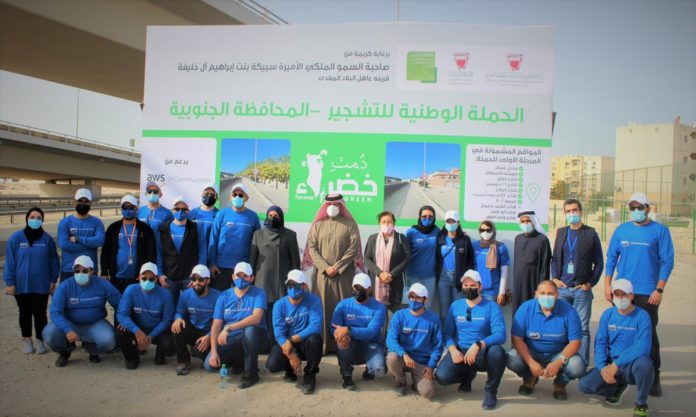 The National Initiative for Agricultural Development (NIAD), in cooperation with Amazon Web Services Bahrain, have launched a project to plant trees in Block 801 in Isa Town as part of the “Forever Green” campaign.

The campaign aims at expanding the green area, purifying the air, preserving the environment and supporting local and international efforts to reach zero-carbon neutrality by 2060. It also facilitates partnership between the public and private sectors towards the implementation of afforestation projects and encourages individuals, institutions and society to play their role in supporting national efforts to expand the green area.

The greening of block 801 featured planting 80 seedlings of neem trees and 158 seedlings of tecoma stans over 640 linear meters.

Forty members of the Amazon AWS Incommunities team participated in the project. The company believes in the importance of community partnership in expanding green areas, addressing the effects of climate change, and supporting government strategies to achieve environmental sustainability.

The national campaign “Forever Green”, is implemented under the directives of HM King Hamad bin Isa Al Khalifa and the patronage of HRH Princess Sabeeka bint Ibrahim Al Khalifa, the Wife of HM the King and President of the NIAD Consultative Council. In its first phase, it is committed to completing the afforestation of 27 sites in various cities and governorates across the Kingdom.

Block 801 is the 19th location to be planted under the campaign.