Whether you’re a landlord or a tenant,...
SocietyPR This WeekISB Riffa Campus celebrates 51st National Day of Bahrain 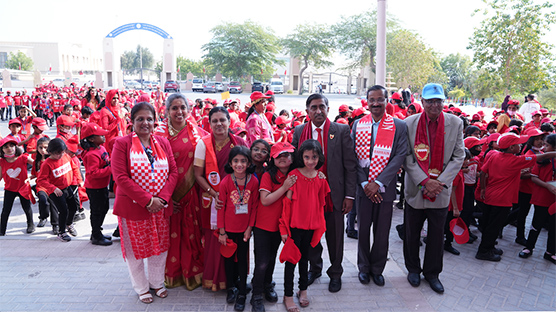 The Indian School Riffa Campus students  paid  tribute to the Kingdom of Bahrain on the occasion of the 51st National Day. Parents and grandparents of the students had attended the grand celebrations marking their love and  respect for the Kingdom  and its leadership.
The events  commenced with the formation of the Bahrain Human Flag shaped like a pearl.  The process  was amazing as the students with their teachers and staff moved from their classes to the campus ground   in a maze to form the flag.    Grade 3 students dressed in white T-shirts and caps shaped the five triangles that represent the five pillars of Islam. They were followed by   students from grade 2 and 1 dressed in red attire to represent the red portion of the Bahrain Flag. Kids from the kindergarten fashioned the header of the event ISB RIFFA 2022. Being part of such a mega event was a novel experience for  little ones who enthusiastically participated in the celebrations.  The formation and red and white colours and the celebrations dazzled the campus with a positive vibe.The  National Anthem marked the opening of the day’s   celebrations which was sung   by all members of the ISB family.

Prince Natarajan in his address welcomed the guests and applauded the school for the formations and the unique representations  bringing out the best in pupils. He extended best wishes to His Majesty King Hamad bin Isa Al Khalifa,  His Royal Highness Prince Salman bin Hamad Al Khalifa, the Crown Prince and Prime Minister, the Royal Family and the people of Bahrain on the occasion of the National Day.

The programme continued with traditional dances performed by the Arabic students from classes 1, 2 and 3 which were choreographed by their teachers. While the show was on, student parades were also taking place, and it was much more fun for  ISB junior reporters  visiting different parts of the campus to interview and get feedback from grandparents and well-wishers on the day’s events.

The National Day celebrations are solemn occasions to honour the Kingdom and its majestic leadership.  The week was jam-packed with activities, greeting cards and posters of Bahrain’s leaders could be seen all around the campus. Arabic teachers and staff organized special events and assemblies for the children to socialize and learn about the cultures and traditions of the Kingdom.